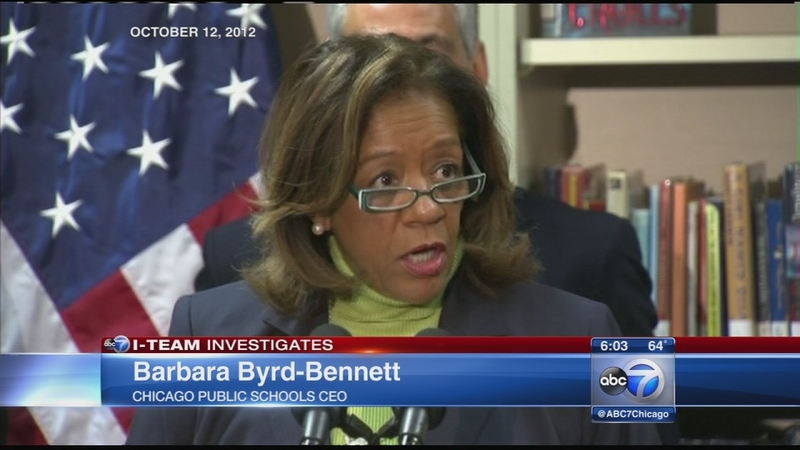 CHICAGO (WLS) -- Amid the ongoing CPS federal probe, the ABC 7 I-Team has learned that this isn't the first time Barbara Byrd-Bennett has found herself under public scrutiny.

Highly paid top educators in big cities frequently come under fire; most consider that it goes with the territory.

In the case of Byrd-Bennett, her previous positions with public school systems in Brooklyn, New York, Detroit and Cleveland may have allowed her to build up calluses against the scrutiny that is now underway in Chicago.

Especially Cleveland, where she faced a firestorm of criticism despite having raised test scores there.

"As CEO of Chicago Public Schools, my focus every single day will be on our children, nothing more," Byrd-Bennett has said previously.

With that assurance, Mayor Rahm Emanuel appointed Byrd-Bennett two and a half years ago to run CPS. She arrived with decades of experience in the education business: not only leading districts, but as a teacher, and also on the outside working as an educational consultant.

While nothing in her background appears to have been the subject of a federal investigation like the one underway in Chicago, her tenure in Cleveland was marred by controversy that resulted in wide criticism and a state financial audit.

From 1998 to 2006 she was the CEO of Cleveland Public Schools, the first such title they had ever handed out there.

During that time, there was a report that the Cleveland Public Schools had inflated attendance figures; Byrd-Bennett fired 800 teachers but was found in a TV investigation to have kept on 206 spare bus drivers at a cost of $3.5 million a year.

She enjoyed first class travel and an expensive on-the-road lifestyle paid by private donors, a practice that resulted in a State of Ohio audit, no charges of misconduct but a recommendation of tighter district financial controls.

It was a pair of needed tax levies that failed and a $30 million deficit that sunk her time in Cleveland. She resigned in 2006.

Byrd-Bennett remains on the job in Chicago, receiving her annual base salary of $250,000 a year.