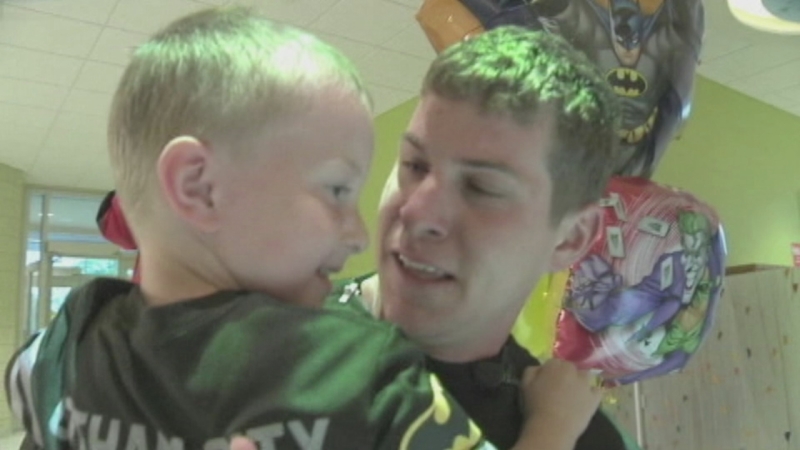 SIOUX FALLS, S.D. -- In Sioux Falls, S.D., a serviceman returned to home, giving his 4-year-old the best present anyone could ask for, a surprise that could even warm the Joker's heart.

A U.S. Navy corpsman came home from Afghanistan earlier this week. His son's birthday is next Sunday, and he made sure this was a visit he'd never forget.

Brayden turns 4 next week. All he wanted was for Batman to be at his birthday - Batman and his dad.

Duke got a two-week break from his yearlong deployment. He dressed up as Batman and surprised Brayden and his little sister Brilee at the Great Plains Zoo. Duke has been gone for seven months and got the hero's welcome he deserves.
.

"It's by far the best... surprising him for his birthday is the best feeling in the world," Duke said.

He and wife Sondra had been planning the surprise for a couple months.

"That was better than just me seeing him because they are his babies," she said.

Duke says as hard as it is being away from home, nothing beats the feeling of coming back together.

"It's all about them, it's not about me being home or nothing," he said. "These are my two little kids right here, they are my pride and joy... and I'd give anything for them."

Duke says they're going to do whatever Brayden wants over the next two weeks. He thinks they'll go to a water park and go-karting while he's home.