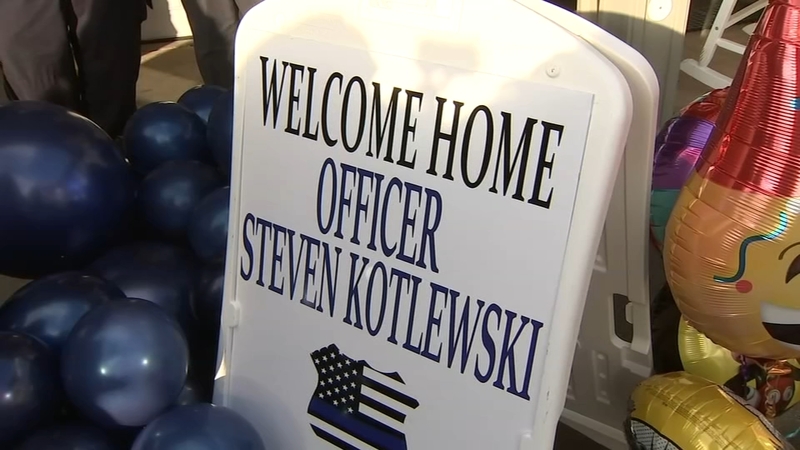 BENSENVILLE, Ill. (WLS) -- A Bensenville police officer shot in the line of duty is now back home after more than a month recovering in the hospital.

It was a warm welcome for Officer Steven Kotlewski as he was led back home by his fellow officers in blue.

"Um! What I miss in the last six weeks," Kotlewski asked.

Despite being in a wheelchair, Kotlewski is in high spirits as he returns to his in-law's home in Roselle.

"It was that emotional to see 80 to 100 police officers come out, from firefighters to paramedics, the garbage truck, everybody was here," said Bensenville Village President Frank Desimone. "You saw the streets, it was a band playing!"

It came after a procession took him from a Wheaton rehabilitation hospital on Saturday, where he spent 42 days working to get his movement back after being shot nine times.

"I kind of got shot the best nine possible ways a person can get shot,' Kotlewski said. "Most of my injuries are just orthopedic. Just bones, man. With the exception of a few nerves, I mean, they say I'll be running again so it's not much to be sad about, right?"

It happened early last month when Kotlewski was responding to a home for a domestic disturbance.

Tyler was arrested as Kotlewski's family said they were counting their blessings at the same time.

"I thought my son was going to pass. When I walked in that room and I seen him, I thought he was gone,' Officer Kotlewski's father, Arthur, said. "I'm grateful to God that he's back. I know God had something to do with it."

Thankful to be alive and back home, the father of three said he's looking ahead to spending much-needed time with his family.

"If you get to roll the dice on nine bullets," Kotlewski starts to say as his wife helps wipe his nose "Hey, what? Knock it off! I'm on the news right now!"

While his future with the Bensenville Police Department remains uncertain, Officer Kotlewski said he will remain focused on his road to recovery, until he gets back on the force.