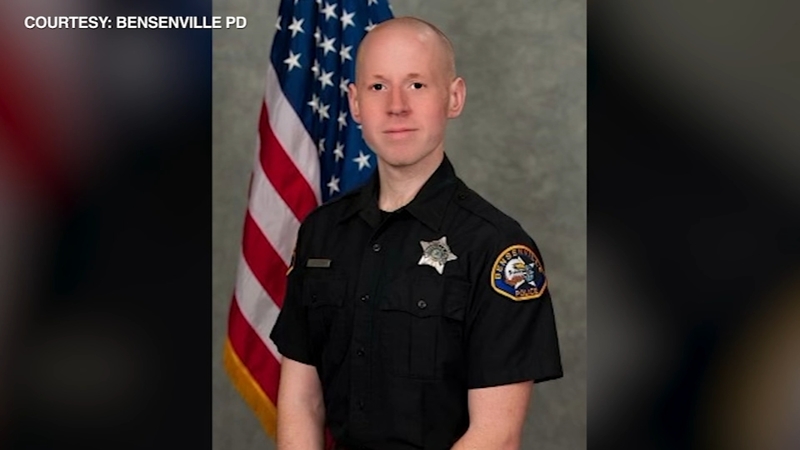 Lawyer for injured Bensenville officer speaks out after charges filed

BENSENVILLE, Ill. (WLS) -- A 21-year-old Bensenville man has been charged with attempted murder in connection with the shooting of a police officer early Saturday morning.

Tyler is also charged with three counts of aggravated battery. In two, he is accused of punching two detectives in their faces, the report said.

The officer was shot early Saturday morning while responding to a domestic disturbance call in the west suburbs.

Kotlewski, who is a veteran of the Bensenville Police Department, was among the first to respond to the call just before 1 a.m. in the 100-block of South York Road, Chief Dan Schulze said.

The officer's weapon was holstered at the time of the shooting, according to Bensenville police.

RELATED: Chicago police officer who fatally shot Gresham man had been suspended in past, documents show

Kotlewski was taken to Loyola University Medical Center and underwent surgery Saturday. His injuries were described Sunday as "extensive."

An attorney for the officer's family said Sunday he remains on a ventilator with more surgery expected Monday.

"The whole family just can't believe the kind of support that has come through," said Richard Blass, the Kotlewski family's attorney and spokesman.

He said the family is grateful as the father of three recovers from his multiple gunshot wounds.

"Most of his injuries are in the legs," Blass said. "Although one hit his vest, one went under his vest."

Blass said the badly injured officer will recover, though he remained in critical condition Sunday.

"Every day that you got to give your children a hug and your wife a hug and your whoever you're with at the house a hug because you don't know if the next day is going to be your last," Blass said.

Tens of thousands of dollars have been donated on GoFundMe.com. The Bensenville Police Department said Kotlewski will celebrate 12 years with the department next month.

The DuPage County State's Attorney's Office said Tyler has been denied bond. He is facing multiple charges, including one count of attempted first-degree murder. Tyler is expected back in court on Dec. 6.

People who live in the apartment complex were in disbelief after the shooting.

"That's the thing! This family is really - it's a really good family. I've seen them and they look like they get along pretty well together," said neighbor Yesenia Cruz. "They tell us it was an active shooter obviously inside the apartment and it was one of our neighbors. As I know, this family is a really good family. We've been knowing them since they moved in recently. It's a 13-year-old girl, a lady and her son."

Cruz added that the situation left her wondering who her neighbors are.

"It does worry me and my family. Like, we don't know who's living next to us," Cruz said. "But like I said, who knows the situation they're going through?"

Tyler's bond was denied Sunday. His next court appearance is scheduled for Dec. 6.