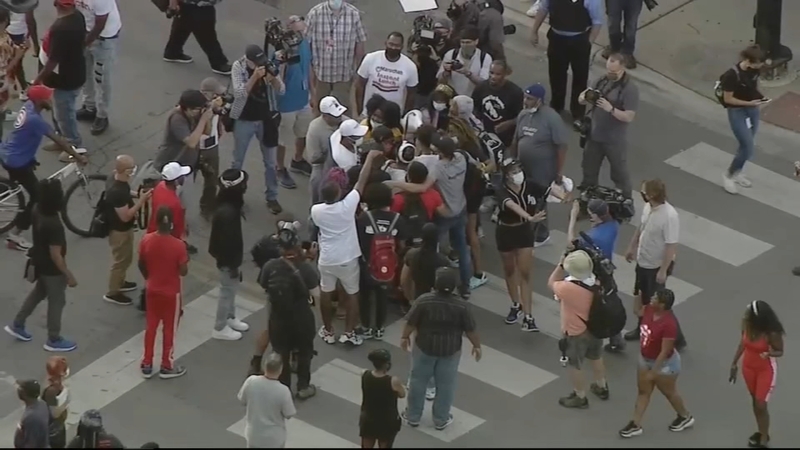 CHICAGO (WLS) -- Organizers of a rally at the 7th District in Englewood were met with some resistance Tuesday night from the community.

Black Lives Matter Chicago called for a rally at the Englewood Police Station in 63rd Street, but some Englewood residents pushed back on what they saw as an intrusion.

"I'm not pro-police," said Darryl Smith, an Englewood resident. "But if I have a working relationship with the few good police we have why then disrupt that?"

"If you are going to do something, do it right. And you put other people's lives at risk when you coming into someone else's neighborhood you don't know the dynamic," said Duane Kidd.

On Wednesday, some of the residents who were at the 7th District the night before explained that they demand transparency and accountability from the police regarding a police shooting Sunday in Englewood.

Long before the shooting, community members said they have been working to improve relations with police and conditions for residents.

"If that's your interest to antagonize the police that some of us have a working relationship with, then take your fight to 35 and Michigan where their bosses are," Smith said.

On Wednesday, the 7th District leadership shared appreciation for the community's support.

"The good citizens, the good community members of Englewood, stepped up and said 'we are not going to allow more chaos in our neighborhoods,'" said Commander Larry Snelling of the 7th District.

"We all have a common goal of keeping this community safe. We are on different sets of tracks but we are heading in the same direction," said Sergeant E. Dixon.

The spokesperson for Black Lives Matter Chicago told ABC7 that some in their group are from Englewood, but acknowledges tensions between some community organizers.

"To all the young people trying to speak for change, I say continue to do so, but make sure it's authentic," Kidd said.