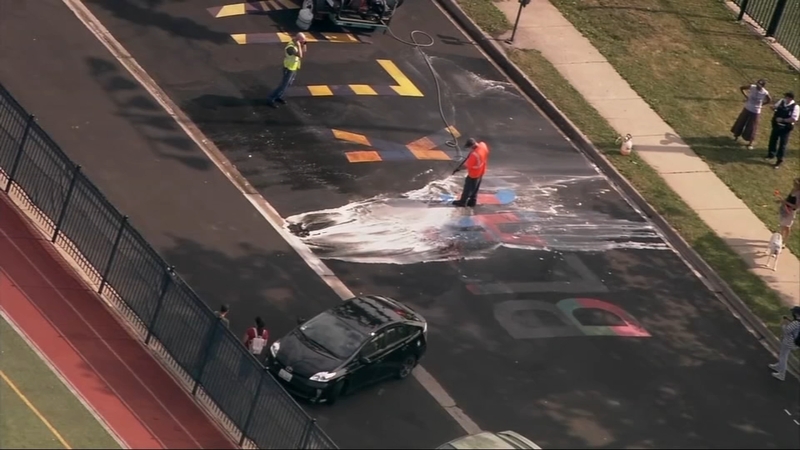 Parts of the mural was painted over in order to make it read "All Lives Matter."

"If they cannot understand that all lives don't matter until Black lives matter, they did this out of hatred," said activist and mural organizer Cortlyn Kelly.

About 20 volunteers painted the mural over two days in June with bright, inclusive and symbolic colors.

It was made to be more colorful than other BLM murals around the country. Organizers said they intended that distinction to reflect Oak Park's diversity and to be as inclusive as possible since this mural was going up during Pride month.

City workers and activists painted the words Black Lives Matter in enormous bright yellow letters on the street leading to the White House, a highly visible sign of Washington's embrace of a movement that has put it at odds with President Donald Trump.

Oak Park resident Cullen Benson approached the Oak Park Area Arts Council with the idea in the wake of protests after George Floyd was killed.

"This is a piece of history to influence generations to come," Benson said last month.

An arrest was made moments after a driver allegedly yelled, "All lives matter," and pulled a gun on a member of a crowd watching over the Black Lives Matter mural in Martinez.

On Wednesday, some who live nearby shared their reactions with ABC7.

"The village is a place of inclusion and to have someone come and destroy someone else's work is disrespectful and disgusting," said resident Yolanda Taylor.

Kelly hopes the incident serves "as a wake-up call."

"Use this as another conversation starter," Kelly said. "When we starting this mural, we wanted people to have conversations and clearly more conversation needs to be had."

By Wednesday night, the mural has become even more colorful than when it was first painted. Supporters added chalk writings and drawings to echo the larger message.

The group's message to those who vandalized artists' and activists' work is that hate has no home here.

'Black Lives Matter is not just a movement," said mural designer Franka Huanchicay. "It's not just a political statement, but it is just about people."

"If you hear Black Lives Matter and immediately your response is to say 'All Lives Matter,' says a lot about how you perceive race," said Makayla Pye, of the Revolutionary Oak Park Youth Action League.