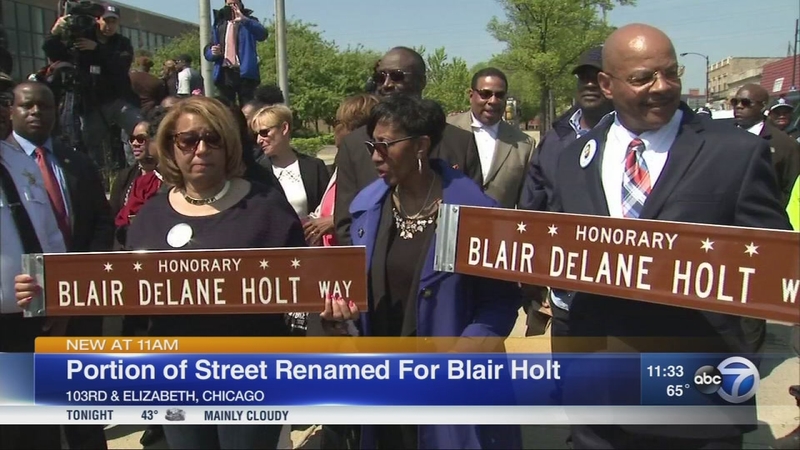 CHICAGO (WLS) -- A portion of a Chicago street was designated Wednesday morning in honor of Blair Holt, a 16-year-old who was fatally shot on a CTA bus on the Far South Side.

On the 10th anniversary of the shooting, family, friends and community members attended an emotional ceremony to rename 103rd Street between Elizabeth and Vincennes to Blair DeLane Holt Way.

Holt, a popular student at Julian High School, was shot by another teenager who was aiming at a rival. The shooter missed and hit Holt, who was trying to protect a friend.

The honorary street naming is part of several events scheduled during Peace Week, which aims to honor Holt and address issues that negatively impact young people

"We're gonna keep fighting to make a difference because I cannot stand to see another mother or father go through this in this city," Annette Nance-Holt said.
"When they see that name, I'm talking about the would-be violent gun offenders that you would think twice three times four times multiple times about carrying out a deadly and destructive act with a firearm," Ron Holt said.

Holt's killer, Michael Pace, who is now 24 years old, pleaded guilty to first-degree murder in 2009 and was sentenced to 100 years in prison. However, an appeals court ordered his resentencing. The court found that the judge improperly expressed personal views in a speech he gave at the sentencing.

Pace has been remanded to the Cook County Jail. A date for his re-sentencing could set as early as Thursday.

Tiara Reed was on the CTA bus with Blair Holt when he was fatally shot by another teenager 10 years ago.

Among those who honored Holt was some of his friends, who are now young adults, including Tiara Reed. She was on the bus when he was shot.

"I really wish he was here, and wish he could be enjoying what we've been doing," said Reed.

Reed was shot in the ankle, but likely survived because of Holt.

Reed, who just finished her masters degree in criminal justice, recovered from wound, but the emotional scar runs deeper. She has also lost other friends to gun violence.

"We never got a chance to really take a break and grieve and really figure out what's going on because every day you look up and there is another funeral to attend," Reed said.

She has moved away from the city due to the violence, but worries about other young people.

"It's just too much, it's too much violence," Reed said. "It's something no one should have to go through at the age of 16."