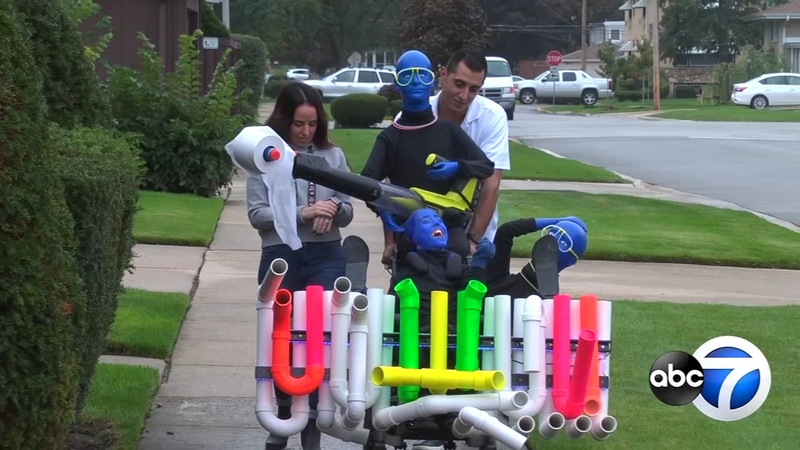 MELROSE PARK, Ill. (WLS) -- With Halloween coming up, some of you might still be searching for a costume. But Anthony Alfano already knows what he'll be: the Blue Man Group!

"Seeing him smile just motivates us to keep moving," said Tony Alfano of the costume.

Anthony's grin is so precious because cerebral palsy has robbed the Melrose Park 10-year-old of the ability to speak.

"He can't say it, but his face says it for him," explained mom Deanna Alfano of Anthony's smiling reaction to his Halloween costumes each year.

"You just have to be around Anthony for 10 minutes and talk to him like he's anybody else and he's going to look at you and his personality comes shining through," she added.

But Anthony's dad pointed out that the cerebral palsy, confining Anthony to a wheelchair, can be an obstacle to other kids' making that connection.

"Costumes... make it softer for them," explained Tony Alfano.

"It's almost a teachable moment for people to talk about inclusion and accepting him," added Deanna Alfano.

That message reached more than 42 million people last year when Anthony became a viral sensation in his 2018 Beetlejuice costume.

"It's amazing how compassionate and supportive even strangers are to our situation," said Deanna Alfano.

That far-reaching enthusiasm is as important this year as it's ever been.

"The fact that he's getting older... and more aware... makes it hard to see when he's not included," said Anthony's mom, becoming emotional.

"This new crowd of neighbors and friends who rally around him on Halloween make us feel good that he's having a great day," she added.