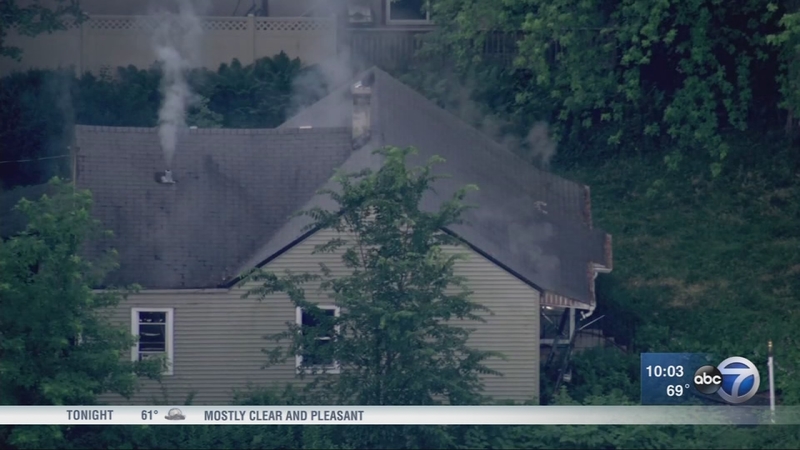 MARKHAM, Ill. (WLS) -- Police in south suburban Markham confirmed that firefighters found the body of a young child in a burned-out, vacant home. Now they're trying to find who put the child there.

The tragic discovery was made in the 15400 block of Hamlin Avenue, in a subdivision of families and young children.

"How does it not affect you? Being a mom, being a parent, nobody wants to see that," said Markham resident Karen Pokracki.

"I've lived here a long time, over 40 years, and nothing. Nothing like this ever happened like this," said Lorene Dykes, also Markham resident.

The fire started around 6 a.m. Monday morning. Police found the body of a small child was discovered inside the house.

The age, gender and cause of the child's death are unknown.

"It's devastating. It's terrible. I know different things happen in different people's neighborhoods, but you just wouldn't think it would happen in your own backyard," said Rebecca Orris, Markham resident.

Neighbors say the house on Hamlin Avenue had been uninhabited for at least a year and a half.

For residents in the neighborhood on this holiday weekend, there's heartbreak and worry.

"Obviously the person who did this is still out there," said Orris. "Who is it? Am I safe? Can I sleep with my windows open tonight?"

Despite the house being empty for some time, neighbors say there haven't been any problems there in the past. The cause of the fire is also under investigation.
Report a correction or typo
Related topics:
markhamhouse firevacant buildingbody found
Copyright © 2022 WLS-TV. All Rights Reserved.
TOP STORIES
Woman found screaming in abandoned Far South Side house, neighbor says
2nd man killed in Near North Side McDonald's mass shooting ID'd
Biden: Monkeypox threat doesn't rise to level of COVID-19
Protest planned after nooses hung from trees near Evanston school
Residents mourn loss of resort as firefighters continue battling blaze
Noah Thompson crowned as the next 'American Idol' in season finale
White Sox star says Yankees slugger made racist remark, benches clear
Show More
Man shot, killed 'without provocation' on NYC subway: police
Beloved Old St. Pat's pastor, Fr. Hurley, returns to say farewell
Wisconsin couple kills bear that attacked them in their home
ABC7 presents 'Our Chicago: Asian Voices'
A new billionaire has been minted nearly every day during the pandemic
More TOP STORIES News