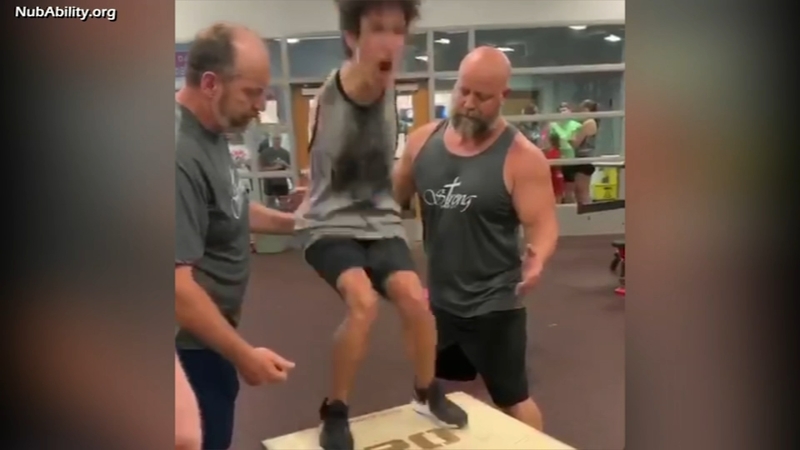 CHICAGO (WLS) -- Born without arms for balance or power, Tim Bannon struggled with a daunting 20 inch box jump Sunday. In a video that has since gone viral, with over 4 million views, the Hillside teen is seen repeatedly failing to jump high enough before finally planting his feet firmly on top.

It's a goal he's reached before, though other kids have told the 14-year-old he'd never pull it off.

"All the people who said I really, really couldn't were in the front of my mind saying, 'Just don't do it, you're too weak to do it,'" recalled Bannon Wednesday.

At NubAbility camp for limb different youth in Du Quoin, Illinois, Bannon tuned out the naysayers, hearing his coach loudest of all.

"All the people that told you, 'you can't...' Right here. Jump on it, now," demanded Coach Sabrina Reiswig in the video, slamming her hand on the box top.

After year-round core and leg strength training, Bannon responded just as loud, stamping out negativity as he stuck the landing.

"I just started crying out of pure joy and a little bit of sadness too," he said.

The fact he's now a viral hit surprised Bannon, but he's happy to show everyone with a limb difference they can excel in athletics.

"I'm hoping when they see that video that they're gonna be, like, 'Holy cow, this kid can do it, I can do it too,'" Bannon explained, adding a message for people who see inability instead of athletes who can become friends: "Don't be a bully, be a buddy."

The soon-to-be high school freshman admitted he had another motivation behind all this time in the gym.

"More just to get more of the ladies," he said with a laugh.

For Bannon, sport goes well beyond that box jump. Wednesday he trained for a triathlon at 63rd Street Beach.

He was working with Dare2tri, an organization that helps disabled athletes run, bike and even swim.

It's remarkable, considering the added risk for someone like Bannon.

"Faceplant. Like, just flat out there's no way to brace yourself when you're going forward," said Linda Bannon, Tim's mom, adding, "The only thing breaking your fall is your nose."

She's very aware, not just as Tim's mom but as another person born without arms. Experiencing similar challenges, and watching how her son has handled the newfound acclaim, Linda Bannon is proud to see her son make a difference for future generations.

"He can help other kids that struggle the same way as he does and maybe they won't have to struggle as much," she said.