US Rep. Brad Schneider of IL tests positive for COVID-19 after Capitol riot 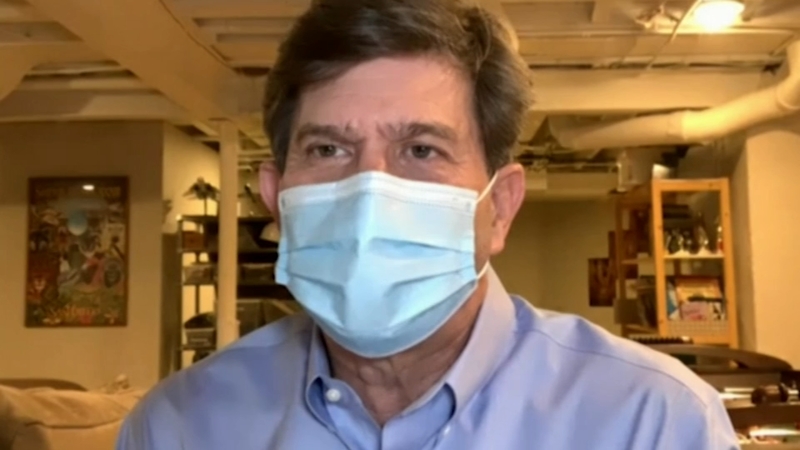 US Rep. Schneider tests positive for COVID-19 after Capitol riot

DEERFIELD, Ill. (WLS) -- U.S. Rep. Brad Schneider has tested positive for COVID-19 after being locked down with other lawmakers in the U.S. Capitol for several hours last week.

Schneider, D-Deerfield, said he received a positive test Tuesday morning after the House attending physician recommended he get tested Monday. He said he is living in the basement of his Deerfield home in "strict isolation" from his family, but he's making the best of it.

"I have my stationary bike," Schneider said. "As probably most people my age, I have my record albums down here."

U.S. Representative Brad Schneider describes what it was like as rioters broke into the U.S. Capitol.

Schneider is the third Democrat to test positive since the siege at the Capitol. He blasted some of his colleagues for not caring for the safety of others.

"I don't know how it came to be that masks are a political statement," Schneider said. "Masks are just common decency and common sense. These people who refuse to wear masks out of - I struggle for the word, it's more than arrogance and more than contempt - it's a desire to cause injuries to others."

Schneider said he is not yet experiencing symptoms, but has called for action. He said that those who ignore public health guidance should be sanctioned and immediately removed from the House floor by the Sergeant at Arms for reckless endangerment of their colleagues.

"My concern was more for the country than for my own personal safety," Schneider said.

Schneider said he received this first dose of Pfizer's COVID vaccine last week and is looking forward to getting the second dose in a couple of weeks.

In the meantime, he said he plans to make any votes about the potential impeachment of Donald Trump, by proxy this week.

"Last Wednesday, after narrowly escaping a violent mob incited by the President of the United States to attack the Capitol and its occupants, I was forced to spend several hours in a secure but confined location with dozens of other Members of Congress. Several Republican lawmakers in the room adamantly refused to wear a mask, as demonstrated in video from Punchbowl News, even when politely asked by their colleagues. Today, I am now in strict isolation, worried that I have risked my wife's health and angry at the selfishness and arrogance of the anti-maskers who put their own contempt and disregard for decency ahead of the health and safety of their colleagues and our staff. I am at least the third Member from that room paying the price, including Rep. Pramila Jayapal and Rep. Bonnie Watson Coleman, a 75-year-old cancer survivor.

"Wearing a mask is not a political statement, it is public health guidance, common courtesy, and simply what should be expected of all decent people.

"We can no longer tolerate Members coming to the floor or gathering in the halls of Congress without doing the bare minimum to protect those around them. Those that flout public health guidance should be sanctioned and immediately removed from the House floor by the Sergeant at Arms for their reckless endangerment of their colleagues.

"Thankfully, I have not yet experienced symptoms and am in the care of capable physicians. Since driving home to Deerfield from Washington, I have remained isolated as much as possible from my wife in our house and have not experienced other close contacts since my exposure on Wednesday.