Ex-officer cries on stand, says he did nothing wrong during trial tied to fatal Breonna Taylor raid 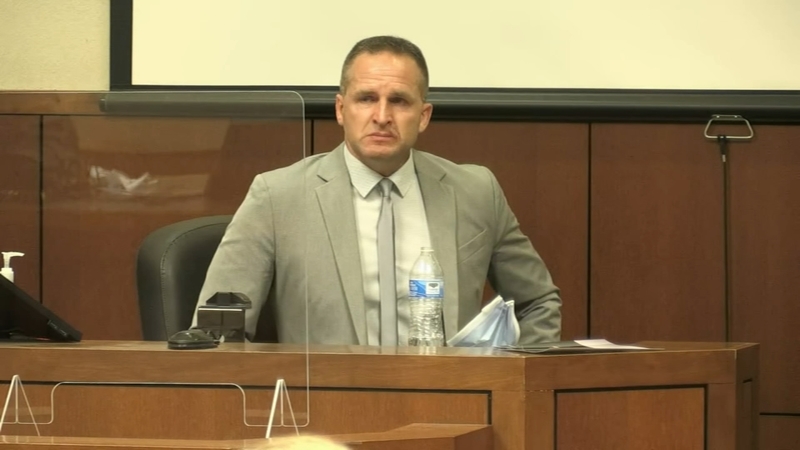 LOUISVILLE, Ky. -- The former Louisville Metro Police detective who was part of the botched raid of Breonna Taylor's apartment in March 2020 testified through tears at his trial Wednesday as he defended his decision to open fire into the home, CNN reported.

Former Detective Brett Hankison testified that when a team of officers rammed into the home to execute a search warrant, his former colleague Sgt. Jonathan Mattingly was shot by what appeared to be a shadowy figure with a rifle in the dark apartment.

"I knew they were trying to get to him, and it appeared to me they were being executed with this rifle," Hankison said. "I returned fire through the sliding glass door, and that did not stop the threat."

Throughout his testimony, Hankison repeatedly paused to regain his composure, wiped his nose and sniffled.

In cross-examination, Hankison clarified that when the shooting began he retreated from the apartment door to the sidewalk, and then along to the side of the house. He testified that he saw the flashing of a gun muzzle inside, and so shot five times into sliding glass doors and then five more times into a bedroom window at what he believed was the threat.

He did not realize at the time, he testified, that there was another apartment positioned directly behind Taylor's.

Hankison, 45, is charged with three counts of wanton endangerment as prosecutors say he fired 10 shots blindly into Taylor's home during the raid, endangering a man, a pregnant woman and her 5-year-old son next door. Hankison has pleaded not guilty and his attorneys have argued he acted to defend his fellow officers in a chaotic situation.

Prosecutors rested their case on Tuesday after calling 26 witnesses to the stand. The defense rested after Hankison's testimony ended on Wednesday afternoon. Closing arguments and deliberations are expected for Thursday.

The charges stem from the botched raid on the early morning of March 13, 2020, in which police fatally shot Taylor, a 26-year-old emergency medical technician, in her own home.

The officers had battered down the door to execute a search warrant related to a drug investigation. Thinking they were intruders, Taylor's boyfriend Kenneth Walker III grabbed a gun he legally owned and fired a shot, hitting Mattingly in the leg. That triggered a volley of fire from the officers, including Hankison, who was standing outside the apartment.

Taylor, who was standing in a hallway with Walker, was shot multiple times. Walker was not injured.

Combined with the killings of George Floyd and Ahmaud Arbery, Taylor's death set off widespread protests about how the legal system treats Black citizens as well as particular criticisms about the dangers of no-knock warrants.

Hankison is the only officer charged in connection with the shooting, and the charges are not for Taylor's death, but for endangering her neighbors. Kentucky Attorney General Daniel Cameron declined to press charges directly related to Taylor's death, saying the officers were justified in their use of force.

In court Wednesday, Hankison described his career with the Louisville Metro Police Department from 2003 to 2020. On the night of March 12, 2020, he volunteered to be a part of a team executing a search warrant at Taylor's home, but he did not participate in the investigation itself.

The incident went awry when the officers rammed into Taylor's home and Mattingly was shot. Hankison testified that he believed the person inside the home had a rifle.

"I felt helpless knowing that I had a handgun and I was facing rifle fire," he said. "Even though I had a tactical vest on, I knew that was no match for if the shooter came out with the rifle."

No rifle was found at the scene. In opening statements, Kentucky Assistant Attorney General Barbara Whaley said only a Glock pistol was found inside the apartment.

Hankison testified that Walker later came out of the home with his hands up and said that his girlfriend was dead inside.

"That kind of shook me because there was only supposed to be one person in that apartment, and now there was allegedly a girl inside, and that wasn't why we were there," Hankison said.

Hankison said he did "absolutely" nothing wrong during the raid. Still, he said he felt "horrible" when he learned that his bullets had gone through Taylor's apartment and into the neighboring home. He described the incident as a "tragedy" that "didn't have to happen."

Finally, he testified he felt empathy for the neighbor, and then spoke to Taylor's family.

"Ms. Taylor's family, she didn't need to die that night --" he said, before he was cut off by an objection. The words caused some members of the public sitting in the gallery to gasp and sob.

How the trial has gone so far

In court, prosecutors argued that Hankison shot into a window from outside the apartment in a direction perpendicular to where Walker's shot originated.

"This case is about Cody (Etherton) and his partner Chelsea (Napper), who was seven months pregnant at the time, and their 5-year-old son, who was sleeping in the bedroom closest to the front door when the bullets ripped through the apartment and out their sliding glass door, into the night," the prosecutor said.

Hankison's testimony is not the first jurors have heard from him. Prosecutors earlier in the trial played an interview with Hankison that was recorded March 25, 2020, in which he gave similar descriptions of the incident.

In that interview, he said he retreated from the tight breezeway to the parking lot and started firing.

During the interview played in court, Hankison is heard saying: "I was almost under the impression at the time they were all being sprayed with bullets. I had already seen where the threat was. ... He was straight ahead as the door came open, he was all the way back in that hallway. I returned fire at the angle that I believed him to still be shooting from because I could see the muzzle flashes."

He said he fired through a glass door and a window with his pistol and when he did so the threat stopped.

"I thought the guy was actually advancing, by the last shot I heard, that he was advancing toward us," he said. "And I felt pretty helpless, like there is no way we can challenge this guy with an assault rifle."

"I kind of felt they were sitting ducks," he said, referring to the officers.

Two other officers who were part of the botched raid, Mattingly and former Detective Myles Cosgrove, asserted their Fifth amendment rights not to testify. They were not charged in the incident but could be in an ongoing federal investigation.

Several prosecution witnesses have testified only one gun was found in the apartment -- Walker's legally owned 9 mm. Other officers have testified they didn't fire because they couldn't locate a target.

Napper, Taylor's neighbor, testified that the family went to bed around 10 or 10:30 p.m., but she woke up suddenly.

"It seemed like a bomb," she said of a loud noise she later learned was a ram with gunshots "all together."

"I just froze for a second, and I think he (Etherton) said our apartment was getting shot up," she testified. "He said there was bullets flying everywhere."

None of the three officers in the raid still work for the police department. Hankison was fired in late June 2020, Cosgrove was fired in January 2021, and Mattingly retired in April 2021.