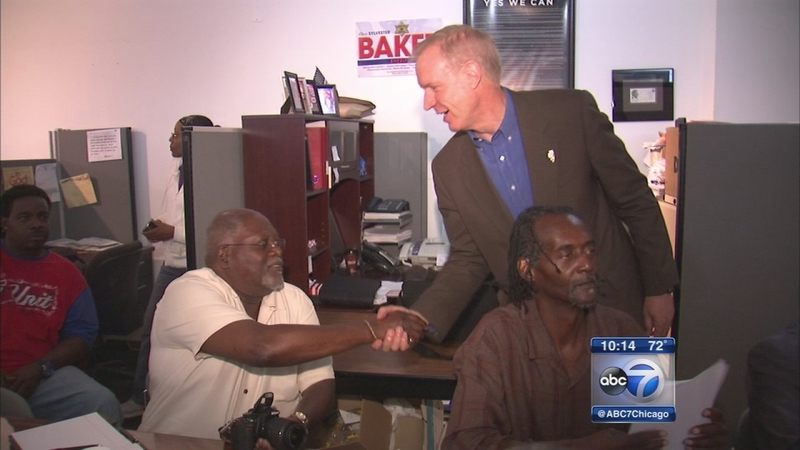 CHICAGO (WLS) -- Is it a multimillionaire stepping up to help a community, or is it a political candidate trying to buy votes? ABC7 Eyewitness News has learned Bruce Rauner has promised to give a South Side credit union $1 million.

Nothing like this has ever happened in Illinois politics: A candidate for governor promised $1 million of his own money to help the audience at a campaign event.

"I understand what he understands, and that's money," said Otis Monroe, Monroe Foundation.

Monroe was among the African American activists who greeted Bruce Rauner this week at the National Black Wall Street office. After the doors closed to the news media, Monroe says he asked the wealthy Republican to deposit $1 million in the South Side Community Federal Credit Union for loans to small businesses.

"(You heard him say that?) Yes I did, and so did 60 other people," said Mark Allen, National Black Wall Street.

Allen said Rauner, the venture capitalist who estimates his net worth at least in the hundreds of millions of dollars, promised to transfer the cash within a month.

A Rauner campaign spokesman confirmed the $1 million dollar deal, calling it "one of many steps Bruce will take to reinvigorate our communities that have suffered under the failed policies and broken commitments of politicians."

"If it makes sense to the credit union, and the people we serve, we're all for it," said Gregg Brown, Southside Community Federal Credit Union.

A spokeswoman for a stunned Quinn campaign wrote: "Any exchange of money for political support raises serious ethical questions. Pay to play has no place in Illinois."

"It's not Democrat, it's not Republican, it's business," said Allen.

Rauner says he will not concede the city's black vote to the Democratic incumbent who won lopsided majorities here in 2010. Speaking for himself, Otis Monroe says the credit union deal could make a difference for the Republican.

"I would be more likely to consider voting for him once the commitment is actually executed," said Monroe.

The Rauner campaign says the Republican has a long history of working to improve communities on the West and South Sides of Chicago. A Quinn spokeswoman says Rauner has a "sorry record" of not hiring African Americans at his investment firm and is trying camouflage his past.