Rauner tells GOP at state fair: "This is our time" 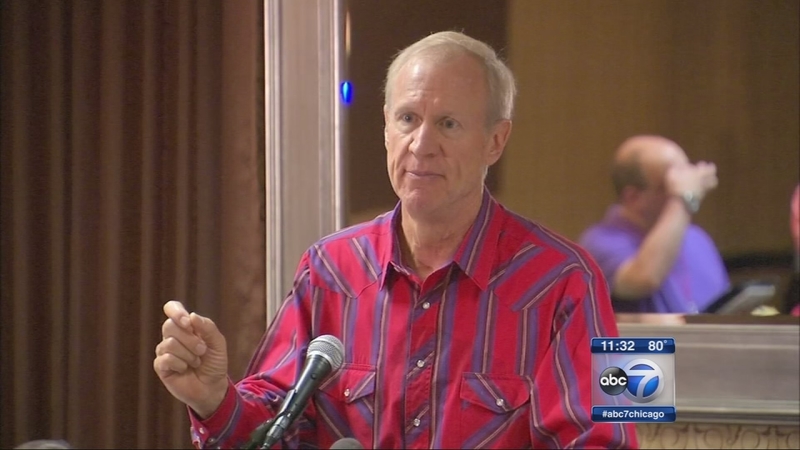 The election year sparked much conversation about Republican presidential nominee Donald Trump, but Rauner wanted to focus on the state party's efforts to win seats in the Legislature and move his "Turnaround Agenda" forward.

Donald Trump was the big topic of discussion at GOP Day at the Illinois State Fair.

For the third year in a row, Rauner arrived at the picnic on his motorcycle while across the street -- as usual -- bussed-in, union members held another noisy demonstration.

"If yellin' and screamin' and chantin' and intimidatin' solve problems, Illinois would not have a single problem ever," Rauner said.

Rauner told party county chairmen Wednesday that Illinois voters know "this is our time" and will stand with the GOP to defeat "machine" Democrats who have taken over.

The first-term governor said Democrats have far outspent his party in recent elections. But he promised the "biggest ground game ever" for legislative races this fall.

In 20 months, Rauner has been unable to get a full-year budget with legislative Democrats - let alone portions of his pro-business agenda.

Democrats hold supermajorities of 71-47 in the House and 39-20 in the Senate.

Rauner, who still has not endorsed Trump, again would say nothing about the presidential race. He said: "I'm 100 percent focused on the state of Illinois."

However, Kirk -- the state-wide ticket-topper up for re-election this fall -- re-affirmed his opposition to Trump and repeated his plan to write-in someone else.

"We gotta have somebody who puts patriotism over party," Kirk said.

However, Trump supporters at the county chairmen's breakfast a few hours earlier appeared to be losing patience with both Kirk and Rauner.

"It's time to suck it up and just join the team. Nobody wins the Super Bowl when one or more players hang back," said Mike Mendola, of Marshall County.

"Just like I'm supporting Mark Kirk, I would expect Mark Kirk and his supporters to support Donald Trump," said Ken Livengood, of Round Lake Beach.