Politicians pay tribute to veterans, look ahead to upcoming battles 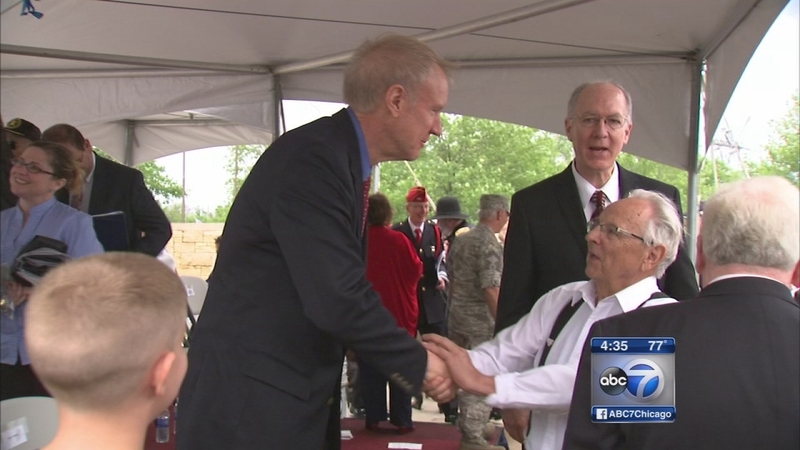 "I will never forget the memory of all those who answered their country's call for service," said U.S. Rep. Bill Foster, D-Illinois.

Democratic Congresswoman Tammy Duckworth, a veteran who recently announced that she will be a 2016 candidate for U.S. Senate, said it was not appropriate to talk politics on Memorial Day.

"I don't want to talk politics here, it's not appropriate," she said. "The men and women who are laid to rest here deserve full attention today."

Duckworth, a new mother, was seated on stage next to her south suburban colleague, Democratic Congresswoman Robin Kelly, who said she might still run against Duckworth in the Democratic primary next year.

"I'm helping to sponsor her baby shower when we get back to D.C," Kelly said. "It's nothing against Tammy or anything like that."

Gov. Bruce Rauner tried not to talk politics, but he is on his way to Springfield for tough negotiations with the Democratic-controlled House and Senate on next year's state budget, which is projected to see a $6 billion deficit.

Hours after the Elwood ceremony, House Speaker Michael Madigan announced that his party will create its own version of a state budget and leave it up to Rauner to make cuts.

This year is the 50th anniversary of the deployment of U.S. ground combat troops to southeast Asia.

For Joe Kocielko, a Vietnam veteran, Memorial Day is a difficult day. He said he saw hundreds of Army comrades die in the Southeast Asian jungle. And like so many other Vietnam veterans, he still suffers post-traumatic stress disorder.

"It's a great day but it brings back a lot of bad memories," Kocielko said.