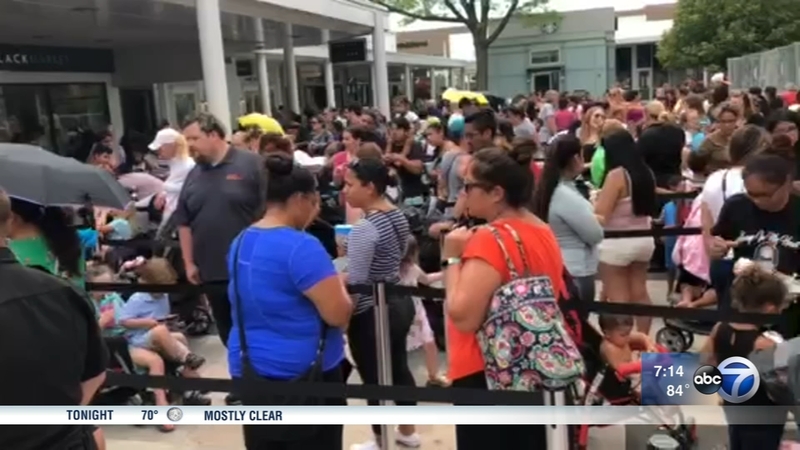 CHICAGO (WLS) -- Parents and children mobbed Build-A-Bear stores in Chicago and across the country Thursday after the company offered a "Pay Your Age" promotion, where customers could build their perfect stuffed pet for the same dollar amount as their age. The Navy Pier Build-A-Bear location closed just after 6:30 p.m., having run out of stock.

Approach any Build-A-Bear store in the Chicago area and you saw hundreds of parents and children lined up stroller to stroller, some smiling and others with tears in their eyes.

The scene repeated itself outside of Build-A-Bear stores across the country and around the world Thursday. The one-day promotion was intended to kick off the company's "Count your Candles" birthday program.

According to customers, there were so many parents and children in line at Build-A-Bear's Navy Pier location by 10:30 a.m. that the line had to be cut off. Several stores in the Chicago area had signs posted saying lines were closed "per local authorities (...) due to crowds and safety concerns."

Charlie Juarez took up that advice.

"We got him in skins because who wants to wait in this line again to get it stuffed? I guarantee no one," Juarez said, holding the "skin" of a Chewbacca stuffed animal.

"We had breakfast in line," said parent Travis Ingram as he held his sleeping son, still clutching his new Pikachu bear.

Other parents simply looked on in awe as they waited for hours.

"I'm absolutely befuddled that so many people (are here) and it's taking this long," said Sonny Boyer.

Ten-year-old Victoria Olayo waited for hours. She was one of the lucky ones.

"I think it was actually pretty worth it because I love this bear so much. It's so cute," she said, holding a stuffed Chewbacca.

"I'm five, and I've got a little teddy," said Xander, another of the lucky ones. "It's a Paw Patrol and I love it."

A spokeswoman for the company said that it could not have predicted the overwhelming response to the Pay Your Age event. In response, she said, the company distributed vouchers to customers present in line to be redeemed for a future purchase. The vouchers will also be made available to Build-A-Bear Bonus Club members in the U.S. and Canada who log into their account by midnight July 15. The vouchers will be honored through August 31.

Amidst all the chaos, one thing is clear: these parents really love their kids!