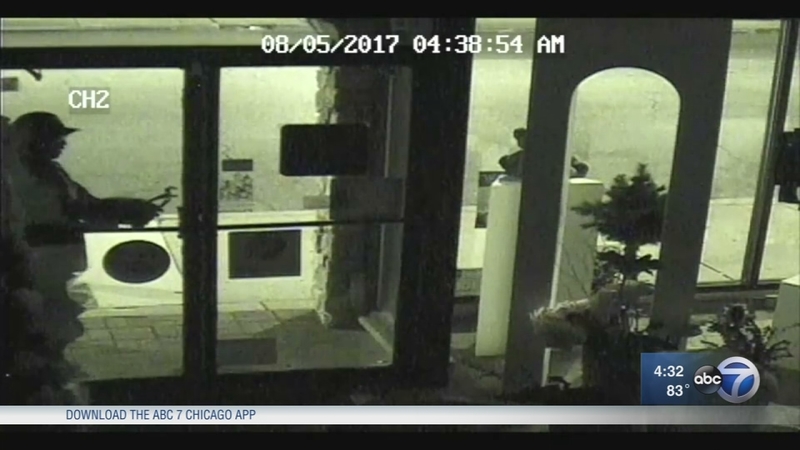 Burglars target businesses on SW Side

CHICAGO (WLS) -- Police have released surveillance video they hope will lead to arrests in a series of burglaries on Chicago's Southwest Side.

Five businesses have been targeted in the Chicago Lawn neighborhood over the last several days, police said.

"I actually was surprised. I expected when I showed up early that morning to find broken glass or some kind of break in," said Erasto Acuna, Zacatacos.

Erasto Acuna arrived at his Zacatacos restaurant on Pulaski early Saturday after the alarm company called. He noticed the cylinder from the front door lock was missing and some things were out of place.

The would-be thief didn't find any cash and was out in two minutes. Acuna has since replaced the cylinder with a theft-deterring ring.

"It seems like it's going to be a little harder to use a device or a tool to just remove the cylinder," he said.

It seems someone is using the same technique nearby. Chicago police put out an alert after several business in the West Lawn neighborhood were robbed - and it all started with tampering with the lock cylinder.

Early Tuesday morning, surveillance video at Bud's Flowers on 63rd Street caught a man focused on the front door's lock cylinder with some type of tool. He got inside, found some cash and was out in three minutes.

"I think he knew what he was doing. He was pretty fast, in and out," said Glenn Krol, Bud's Flowers.

The owner of Bud's Flowers has since upgraded the cylinder in front. There is now a rim around the cylinder - an added feature suggested by his locksmith. He only wished he'd taken the suggestion before the break-in.

"Listen to your locksmith," Krol said.