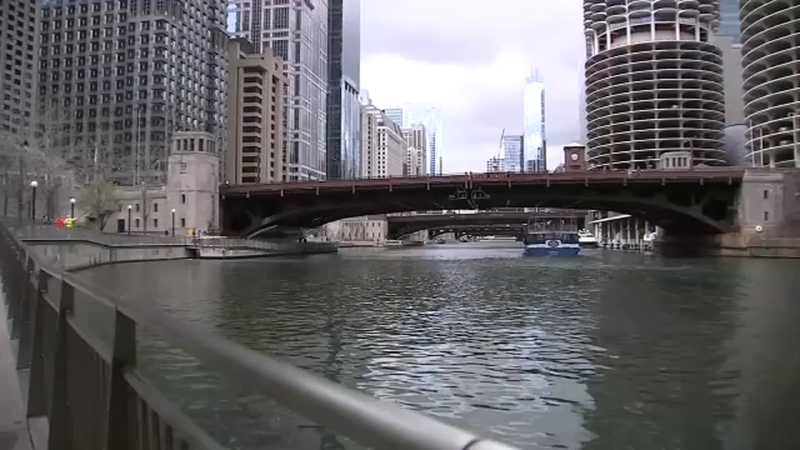 CHICAGO (WLS) -- In another sign of the Chicago area reopening, Mayor Lori Lightfoot has announced the return of some vendors to the Chicago Riverwalk.

Beginning Friday, the city will implement a phased-in approach to vendor re-opening- with everything reopening in May.

It's one of the city's shining symbols. A vibrant Riverwalk finally reopens to vendors and Chicagoans are taking advantage.

People on the Riverwalk will still have to wear a mask and keep socially distant, but expect more signs of activity down there.

"The sun is coming out and people being outside is definitely a more fun environment. You just feel happier all around," said Gabriella Garcia as she enjoyed the Riverwalk.

"You can tell, even though a lot of people are wearing masks, that people are smiling and having a good day, you know," added Garcia's sister Daniella.

To start: Island Party Hut, Beat Kitchen on the River and City Winery will re-open Friday.

Beat Kitchen on the Riverwalk owner, Robert Gomez, said with his music venues that were shut down or only partially open have been patiently waiting for this moment.

"Yes! That's what's going through my mind, we're open! Finally we're open," Gomez said. "There's just something beautiful about it and the boats going by, I mean you're in another world."

"To be able to get through the last year and come back for another season down here is great. We're super excited," added City Winery general manager, Nick Ray.

"Very gradually you'll see more and more vendors in operation, it's exciting because typically we don't begin the concession program until May, so this is a very early start for us," said Michelle Woods, Riverwalk project manager.

It's been a very long year for Mark Stern, one of the managing partners of Island Party Hut. The business was shutdown all of 2020 and now finally reopened Friday.

"It was a long hard year obviously our numbers were way down, I mean 70 percent," Stern said. "We are considering that a non-year. This is a do-over year for us."

Even-though the Northman Beer and Cider Garden has been in the Riverwalk for four years, between construction and the pandemic, this is the first full season for the business.

"We are really happy and I think everyone is happy to get outdoors so we're lucky to have an enormous amount of seating all outdoors socially distanced," said Jonathan Putman, director of operations. "I think it just creates a unique opportunity for people to come out of their winter quarantine hibernation."

"When you follow the guidelines, it can be a safe way to enjoy oneself," Gomez said. "Come down, come down and have a beer, man."