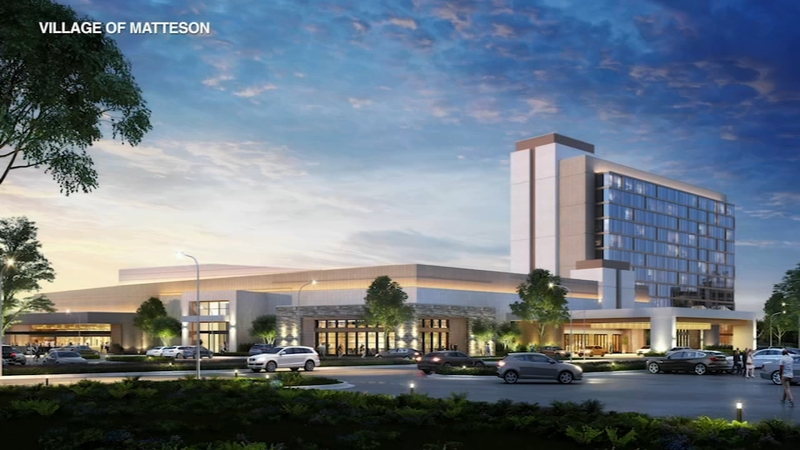 MATTESON, Ill. (WLS) -- The Matteson Village Board of Trustees unanimously approved the Choctaw Nation's plan for a casino in their Monday night board meeting.

The plan was approved in a 6-0 vote. Village trustees said part of the proceeds from the casino will be used to build a south suburban trauma unit.

The casino would be operated by the Choctaw Nation of Oklahoma, and is planned for the corner of Lincoln Highway and Harlem Avenue. The proposed casino would feature 2,000 gaming positions, a food hall, a 200-room hotel, a high-end restaurant, and a 36,000 square foot convention space.

"I believe this project will be an asset not just to Matteson, but to the entire Southland Region," said Matteson Mayor Sheila Chalmers-Currin. "After interviewing multiple casino operators, we felt the team led by the Choctaw Nation provided the best combination of experience, vision, community engagement, and a financially feasible plan" noted the Mayor.

"We're honored with the chance to match our team's experience with the community of Matteson and to create jobs and opportunity across the south suburbs," said Janie Dillard, the tribe's chief executive in charge of its businesses.

Village trustees also said the proposed casino would partner with minority business enterprises, including inside its food hall. The casino would also include a historical exhibit on the multi-cultural history of the area.
Report a correction or typo
Related topics:
businessmattesoncasinodevelopment
Copyright © 2021 WLS-TV. All Rights Reserved.
More Videos
From CNN Newsource affiliates
TOP STORIES