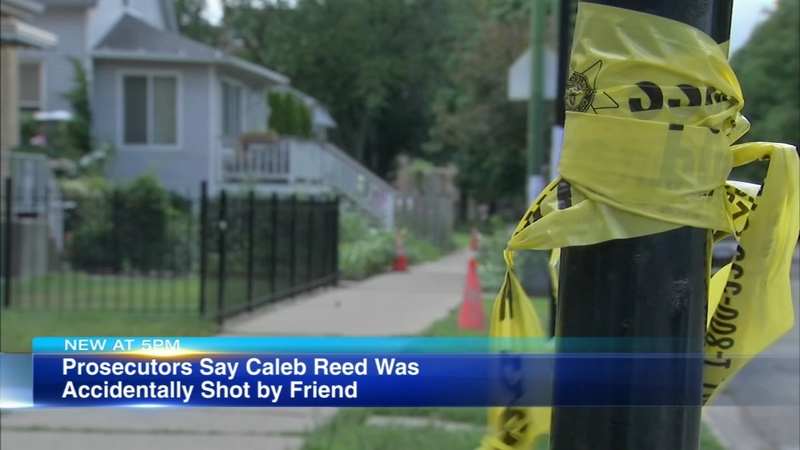 CHICAGO (WLS) -- A young activist was killed this summer when his friend accidentally shot him, according to Cook County Prosecutors.

Caleb Reed, 17, was walking with friends when a Chevy Malibu drove by, and shots were fired on July 31 in the 1900 block of West Granville, in the West Rogers Park neighborhood.

Prosecutors say his friend, Genove Martin, 18, allegedly shot at the Malibu and one of the bullets hit Reed before people inside the car returned fire.

Reed suffered a gunshot wound to the forehead, causing him to fall straight to the ground, according to court documents.

Martin was identified in surveillance video and was arrested on Aug. 30. He's now charged with Reed's murder.

Reed had recently been front and center speaking out against police in schools. A student at Mather High School, he had been working with both GoodKids MadCity and Voices of Youth in Chicago Education, or VOYCE. The student-led groups advocate for the removal of police officers in schools.

At the time of his murder, police were trying to determine if Reed was targeted.

Bond for Martin was set a $300,000 during court Tuesday morning. His next appearance is scheduled for September 21.

VOYCE released the following statement in reaction to the charges:

Voices for Youth in Chicago Education (VOYCE) has learned today that a suspect has been charged in the fatal shooting July 31, 2020, of Caleb Reed, a VOYCE youth leader.

The amount of pain in losing our beloved Caleb Reed is unimaginable. He fearlessly fought to end the cycle of violence. But what Caleb fought for was not just to end violence. He was also working tirelessly to get help for young people who need to heal from the trauma they experience as a result of that violence.