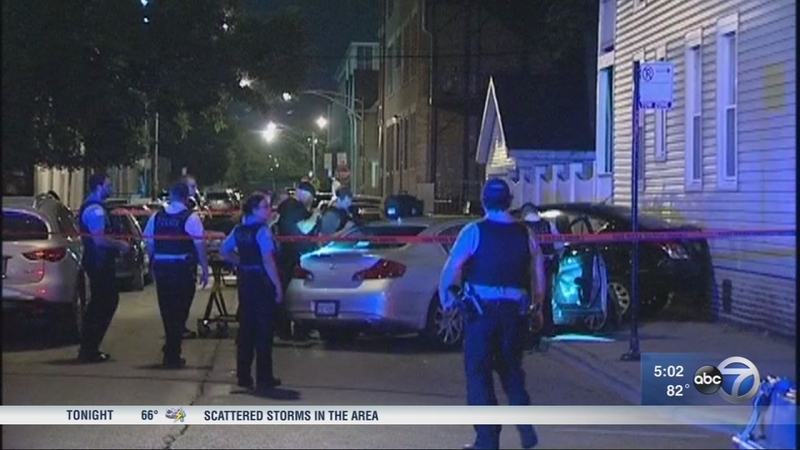 CHICAGO (WLS) -- A man was shot and killed early Thursday morning by someone trying to take his car on Chicago's Northwest Side.

Jesus De La O-Jimenez, 28, was dropping off a female acquaintance around 2:05 a.m. near North Greenview Avenue and West Division Street in the city's Noble Square neighborhood, when police said another man got out of a white vehicle tried to steal his Infiniti.

De La O-Jimenez refused to give up his keys. It is unclear whether a struggle occurred, but police said the suspect fired shots into the his car, striking him in the torso.

Police said De La O-Jimenez tried to drive away, but ended up crashing into Scott Morganegg's parked car a few blocks away, near Greenview and West Potomac Avenue.

"It's a bad way to wake up in what's supposed to be a good neighborhood, when there's a police officer at your door to you know that more crime happened," Morganegg said. "No matter where you are in Chicago, it seems like everyone is affected. That's not a good feeling at all."

In a written statement, Ald. Brian Hopkins (2nd Ward) described the gunman as "an especially dangerous criminal who would choose to murder his unarmed victim simply because he was attempting to flee."

Justin Dolin, who lives nearby, heard the shots and rushed outside to see what happened.

"I ran outside. I saw the silver car, almost horizontal, in the street. An Uber was dropping two people off. I saw them run right over to the car and as soon as they looked into the car they ran right back. They said, 'He's dead,'" Dolin said.

"It's really shocking to think that you possibly heard the last sounds that a human ever made," said Kimberly Butler, who heard the incident unfold outside her bedroom window. "I heard people yelling and then maybe two seconds later, I heard a single gunshot. But it was kind of silenced - it was like a fire cracker sound."

"I saw the car turn the corner and then the screech and then I heard the crash," Butler said.

No one else was hurt.