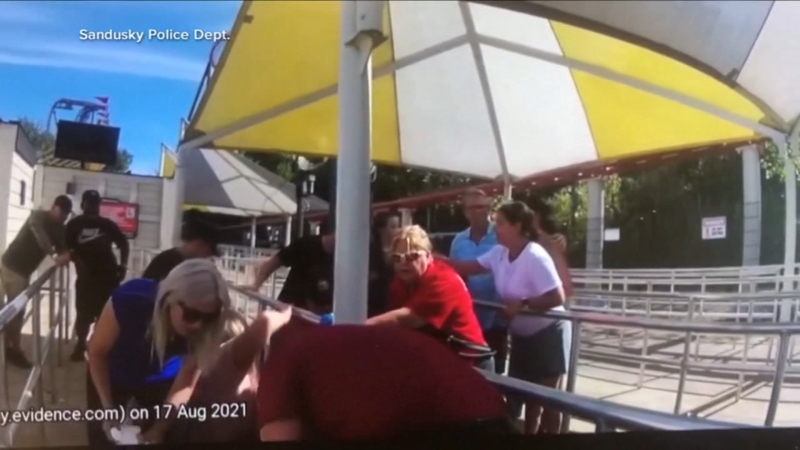 SANDUSKY, Ohio -- A woman waiting in line for a roller coaster at Ohio's Cedar Point was recently struck by falling debris.

Authorities are investigating a harrowing incident at an Ohio amusement park that's a magnet for roller coaster lovers.

Witnesses called 911 from Cedar Point amusement park after officials said a woman was struck by an object that flew from the park's popular "Top Thrill Dragster" roller coaster while she was waiting in line.

Spectators quickly tried to hold down a Michigan carnival ride Thursday as it appeared to be close to tipping over.

The park said the ride was ending its run when a "small metal object" detached from one of the cars and hit the woman, but one witness said the object that hit her head was the size of a football.

According to a police report, theme park guests along with the park's EMS team jumped in to help before rushing her to the hospital.

One park-goer, trauma nurse Dave Vallo, was standing just behind the woman in line when she was struck.

"We were, you know, just trying to be as calm as cool as we could be," Vallo said. "Keep her calm. Make sure she was breathing, everything was as stable as humanly possible. We just did what we could, the best we could with what we had. We didn't have really any supplies until EMS arrived, so we just used, you know, other people's shirts, whatever could control everything that we possibly could keep her safe, keep the scene safe."

Authorities are now trying to figure out what went wrong.

The ride, which is 420-feet tall and goes from 0 to 120 mph in 3.8 seconds, was inspected by the Department of Agriculture in May, and was scheduled for another inspection next month.