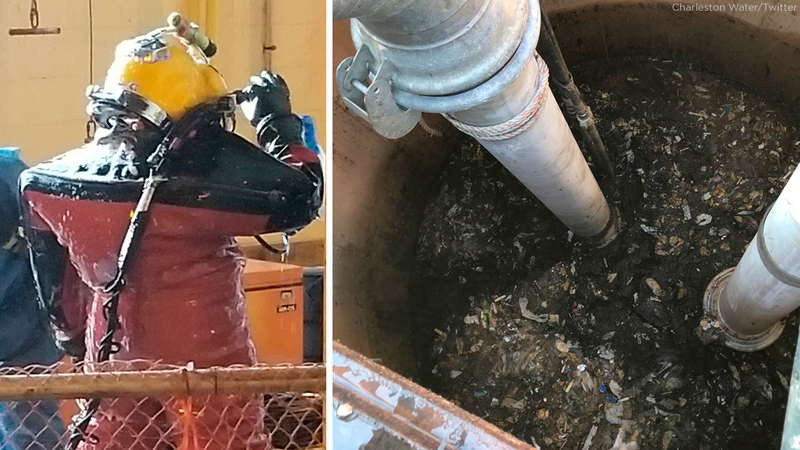 CHARLESTON, SC -- Before you flush a wipe down the toilet, think twice and consider the divers who might have to swim through 80 feet of sewage to pull it out in the future.

That's the message from Charleston Water System, who recently had to send a specialized team of divers deep into a wet well to unclog a series of pumps backed up by a huge jumble of flushed wet wipes.

The clog was discovered last Thursday at the utility's Plum Island Wastewater Treatment Plant. Workers then set up a series of bypass pumps so they could access the obstructed pumps without interrupting the city's flow of wastewater.

With bypass pumps in place, contracted divers from Salmons Marine Contractors in Charleston were sent into the wet well. According to Charleston Water, the divers had to make their way through 80 feet of sewage (with no visibility) and find the source of the obstruction with just their hands.

Then we sent divers 80-90 feet deep into the wet well/raw sewage to search in complete darkness with their hands to find and identify the obstruction. As we expected, they came up with these large masses of wipes in their first two loads, with more to come. pic.twitter.com/XcmZXf9ECF

It took the divers several trips to fully extract the massive clumps of sewage-soaked wipes and clear the pumps. The entire operation took days of around-the-clock work, according to the utility, but everything was flowing freely again by Tuesday, Oct. 16.

(For those wondering, the divers were hosed in bleach as soon as they emerged from the sewage well.)

Wipes weren't the only things the divers managed to find; a baseball and a large piece of metal also had found their way into the sewage system, as well as "many other non-flushables," according to a Charleston Water tweet.

If you ask Charleston Water, only three things are truly flushable: "#1, #2 and toilet paper."

They also found a baseball and a big piece of metal. Don't flush stuff like this. Joking of course, but you should only flush #1, #2, and toilet paper. The photo looking down into a pool of wastewater shows many other non-flushables. We made this pic low-res for your benefit. pic.twitter.com/fInq5YWU5a

Though some manufacturers are very clear about the fact that their products aren't flushable, others have introduced flush-friendly or septic-safe products in recent years. A 2013 Consumer Reports investigation, however, cast doubt on just how well some of those products break down, with CR ultimately recommending that consumers toss wipes (even those billed as flushable) into the trash can.