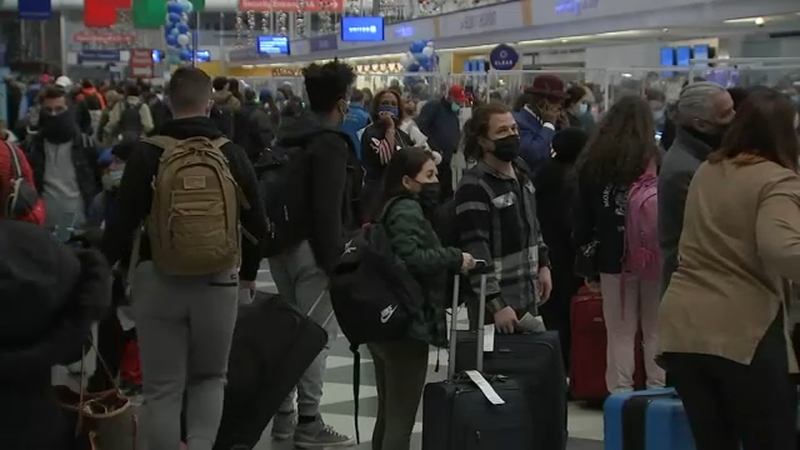 CHICAGO (WLS) -- According to AAA, Sunday is actually the busiest for air travel of the holiday weekend. Final numbers are not in, but if Saturday was any indication, over 2 million people will have flown nationwide just Sunday.

People have noticed the spike in travel on their flights.

"We were lucky to get really early flights where it looked like most people were trying to stay in bed, so we had no problems at all going through, but the plane was packed," said Mickey Shy, who was flying back to Chicago from California.

A local doctor discussed holiday travel and vaccinations as COVID continues to spread.

Air travel reached its pandemic peak at O'Hare airport Sunday. A seemingly endless stream of planes touched down and took off on the very busy Sunday after Thanksgiving.

"It was awesome. We went to Washington D.C. to see our niece and we had a wonderful, wonderful trip. Of course, it's busy, but it was well worth it," said Villare Stewart.

The crowds inside the terminals matched the traffic jam outside. There was the usual packing and repacking on the terminal floor just before check-in, followed by long lines to get through security.

Mild weather across the country meant that despite the crowds, there were relatively few delays and cancellations.

"For us, it was perfect," said Bob Shanley. "We got there a little bit over three hours before our flight so we went through security so fast in Denver, and then just sat and had breakfast and everything went perfect."

While air travel over the holiday weekend isn't quite back to its 2019 levels, according to TSA, twice as many people have gone through the nation's airports this year than last, making for a lot of long-awaited family reunions.

"The borders of the U.S. have been closed to travelers from Europe, so when they opened we had her visit me," said Elenore Neufeld.

"We went to Reno, Nevada," said Alex Wise-Bey. "My cousin lives out there, so we decided to go out there and visit some family for the first time in two years."

Some came in last night ahead of the major rush.

"It was definitely a conscious decision, not only to avoid the traffic but also the price, for sure, was a big factor," said Joseph Petrullo, who was flying back from New Jersey.

AAA said it expected airports, like Midway, to see the worst of it Sunday afternoon between 1 p.m. and 7 p.m.

Despite being the busiest day at the airports, keep in mind that Monday is also expected to be quite busy. So, if you're one of the lucky ones to have had an extended weekend, still give yourself some extra time to get here.
Report a correction or typo
Related topics:
travelchicagomidway airporto'hareair traveltravelaaathanksgivingcoronavirus chicagocoronavirus illinoisholiday travel
Copyright © 2022 WLS-TV. All Rights Reserved.
HOLIDAY TRAVEL
Massive flight cancelations continue as weather and COVID disrupt
Airline woes continue with 2,400 U.S. flights canceled amid outbreak
Airline cancellations could get worse this weekend
1,000 domestic flights, including 17% of JetBlue's schedule, canceled
TOP STORIES
5 tax changes that can boost your refund this year
Family demands justice after 23-year-old woman found dead after date
Chicago weather forecast includes snow into Monday | Live radar
Fauci optimistic omicron will peak in February
Overdose investigation leads to $6M worth of cocaine in Wisconsin
After the omicron wave, what's next for the COVID pandemic?
Illinois driver's license facilities to resume in-person services
Show More
Girl, 8, killed by stray bullet ID'd: ME
19 shot, 4 fatally, in Chicago weekend violence
Rescuers use sausage dangling from drone to lure runaway dog to safety
1 hurt in I-290 shooting in Oak Park: ISP
`Dreadhead Cowboy' pleads guilty to animal cruelty charge
More TOP STORIES News