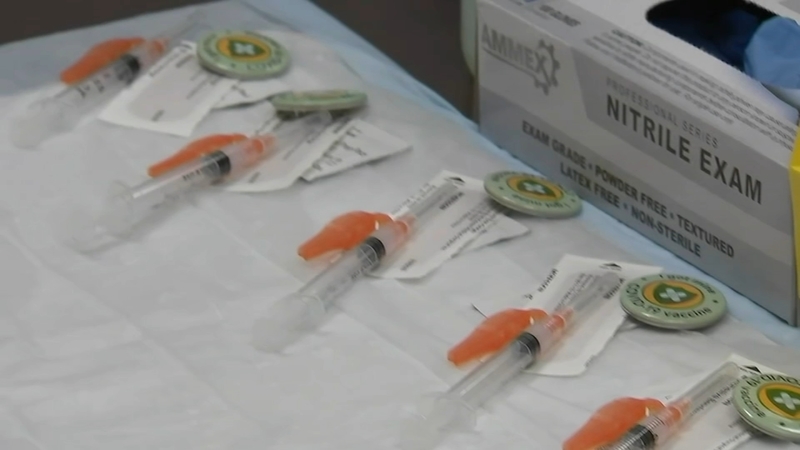 CHICAGO (WLS) -- The ABC7 I-Team has learned that a Chicago hospital is charging patients after getting their free COVID-19 vaccine after a South Shore woman reached out after receiving a bill from Jackson Park Hospital.

The bill arrived in the mail several weeks after Angela Hopkins was vaccinated. Getting the COVID-19 vaccine was a top priority for her.

"I wanted to get it because I do home daycare and I wanted to protect myself and the others that I come in contact with on a daily basis," she said.

She said she got her first shot in February at Jackson Park Hospital in South Shore.

"They made copies of my ID and the insurance card, and I asked them again, are you guys going to charge us or bill us? No, we're not going to bill you. This is just for insurance purposes, it's going to be fine," Hopkins recalled.

But a few weeks later, Hopkins received a bill in the mail from the hospital for $27.

"I'm like, no! It's the principle. You don't bill people when something is supposed to be free! What are you doing?" she said.

She said a hospital representative told her the fee was for administrative costs.

"I said, well, that shouldn't be," she said. "We're being told to go and get the vaccine and it's free. We haven't heard about administration fees, anything."

"It's completely wrong. No consumer should ever be charged for a COVID vaccine," said Carmen Balber, executive director of Consumer Watchdog, a non-profit organization.

Balber said providers like Jackson Park Hospital should know better. She said while administration fees are not uncommon, medical facilities are not allowed to bill the consumer. They can either bill the patient's insurance company or the federal government if the patient doesn't have insurance.

"If we created an extra hurdle requiring people to pay money any form of money for that shot, we'd be less like to reach the herd immunity that we need to go back to life as normal in this country," she explained.

The ABC7 I-Team reached out to Jackson Park Hospital and received a response from chairman and CEO William Doresy, who said the $27 fee is to ensure the shot is administered safely and appropriately. He said the fee is "reimbursed by the patients insurance or for uninsured patients by the health resources and services administration."

But according to the state, it's the hospital's responsibility to get reimbursed by insurance, not the patient's.

The Illinois Department of Healthcare and Family Services told the I-Team, "Under no circumstances should providers be billing customers for COVID-19 vaccine-related costs. Providers should bill the administration fees for the vaccine to Medicaid, Medicare, the private insurer, or in the case of uninsured people, the federal government."

Hopkins said if she didn't know any better she would have ended up paying the hospital to avoid a mark on her credit.

"It's just like, you're talking about people that are less fortunate than most people in this area," she said. "For you to want to charge them something extra? Come on!"

Jackson Park Hospital maintains they follow state and federal guidelines, and said if any billing errors were made they were not intentional and will be rectified quickly.

U.S. Congressman Bobby Rush released a statement on the matter, saying, "I will not tolerate any attempt to undermine the free and equitable distribution of COVID-19 vaccines. I salute the media for keeping the bright light of transparency on these issues. My office will be closely monitoring the situation and reaching out to relevant stakeholders to get to the bottom of this."

If you received a bill for your COVID-19 vaccination, Samantha Chatman and the ABC7 I-Team want to hear from you. Click here to contact the I-Team.

"As follow-up to your request and that of Ms. Angela Hopkins (Patient at Jackson Park Hospital's - Out Patient Center), please let me first advise you, Ms. Hopkins received her 2nd vaccination today at the outpatient center.

Regarding the $27.00 cost for administering the vaccine, Jackson Park Hospital follows the guidelines set by the Illinois Department of Public Health (IDPH) and the Centers for Medicare & Medicaid Services (CMS).

Hopefully, this will resolve any unanswered questions."

"Jackson Park Hospital understands and follows the rules of IDPH and the CDC as they relate to the COVID-19 vaccine and administering the vaccine. If any billing errors have been made they were not intentional and will be investigated and rectified quickly."