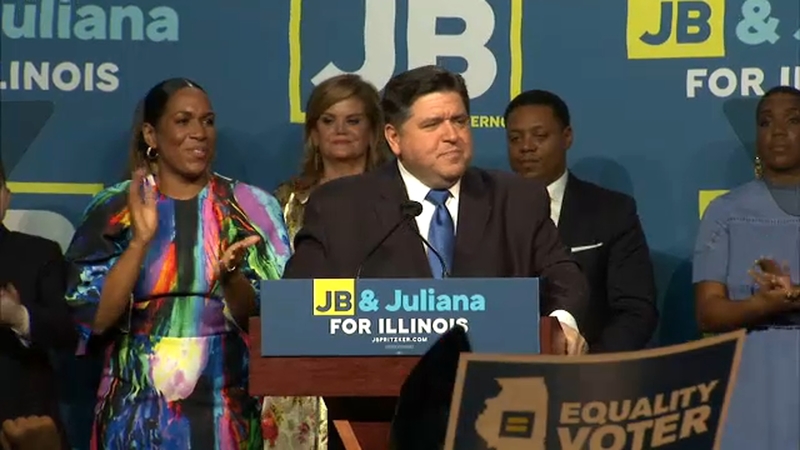 Pritzker and his running mate, Lieutenant Governor-Elect Juliana Stratton, addressed supporters at the Marquis Marriott in the South Loop. Because the race was called so early in the evening, the party got started early as the crowd about 2,000, according to campaign estimates, danced and enjoyed an open bar.

Pritzker spoke for about 16 minutes and thanked Rauner for his service to the state. His speech touched on Illinois history - he called it the "land of Abraham Lincoln and Barack Obama" - as well as his goals as governor.

Pritzker ended the speech with a series of questions his supporters recognize as the rallying cry that closed each of his campaign events.

"Are you ready for the fight?" he asked. "The fight for healthcare for everyone! For well-paid teachers and a quality education for our kids! For equal pay for equal work! The fight for a criminal justice system that is truly just! For environmental policies that are based on science! For a responsible state budget! For gun safety laws that protect our families! For jobs, for a living wage, for strong labor unions! For a state that welcomes immigrants! And for the truth!"

Rauner ran an aggressive campaign that attacked Pritzker at every turn, but you might call him the Teflon candidate; no attacks stuck.

At the Drake Hotel, Rauner took the stage to address his supporters shortly before 8 p.m. He thanked his campaign workers, his staff, and his volunteers, and his family, as well as the people of Illinois.

"The change we sought for Illinois is still the change we need. There's no going back to a time of insider deals and corruption," he said. "The people of Illinois deserve and will demand a government that helps them realize their potential and supports their prosperity."

It’s been an honor to serve. Thank you, Illinois.

The race will be remembered for the incredible amount of money and the slew of negative ads that have characterized it from the beginning.

Rauner and wife Diana made only one campaign stop Tuesday morning, at their polling place in Winnetka.

Pritzker, by comparison, had 10 stops on his schedule Tuesday, most at commuter stations around the city.

At lunchtime he took part in the time-honored Election Day tradition of stopping by Manny's Deli in the South Loop. He was joined by the "who's who" of Chicago and Illinois politicians.