Gift cards for guns: What the Chicago Police Department gets from firearm turn-ins 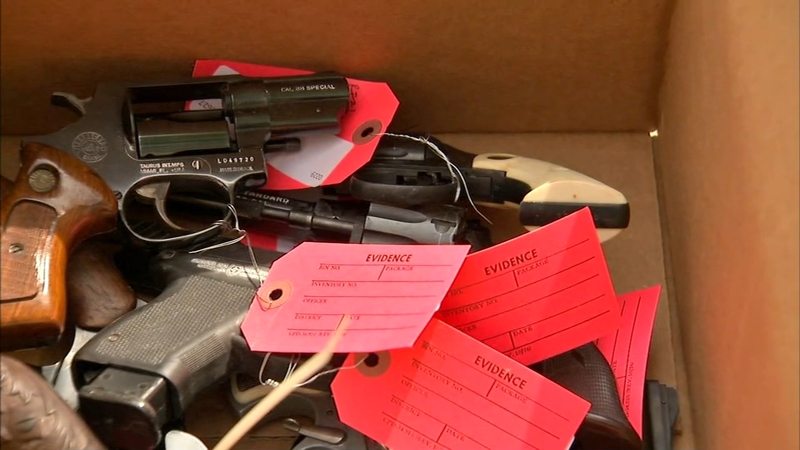 CHICAGO (WLS) -- An I-Team investigation finds some of the weapons taken off the streets during Chicago Police Department firearm turn-in events are very old, rusty and damaged. Others are fakes. But, those trying to stop Chicago violence insist every gun removed from circulation makes the city safer.

"We all have a role to play. We all have a responsibility and doing what we can to help make our community safe," said Rev. Dr. Derrick B. Wells, senior minister at Christ Universal Temple.

Rev. Dr. Wells leads Christ Universal Temple at 119th and Ashland on Chicago's South Side. This past December, a week before Christmas, the church held a gun turn-in event. The goal is give people incentives such as gift cards in exchange for weapons turned in to police, no questions asked.

At just one one event, according to records obtained via the Freedom of Information Act and analyzed by the ABC7 I-Team, Chicago police took in 138 firearms and 23 replicas. That's 30% of the guns CPD received at these events in 2021.

I-Team analysis found that an increasing percentage of fakes are being turned in at these events. Sixteen percent of the gift cards in 2020 were for replicas. That jumped to 20% in 2021.

"Criminals are the least likely folks who are going to be turning the guns in," said James Sobol, Associate Professor, SUNY Buffalo State

Records obtained through FOIA show some of the weapons turned in are very old. They include a "flintlock pocket pistol" that was "popular in BRITAIN during the 18th century," an "early 1900s" Belgian revolver, and several decades-old shotguns and rifles marked as having "heavy rust." They also turned up a toy gun, made to look like a civil war-era revolver.

Criminal justice professor James Sobol has studied gun turn-in programs across the country. He said his research shows the programs don't have a significant impact on reducing crime.

"Guns are being taken off the streets that can't be used to harm people," said Glen Brooks, Director, Chicago Police Department Office of Community Policing. He suggested public relations can protect public safety because all guns that are turned in, even if they're old or damaged, could be dangerous.

"What we really are looking at is the instrument of death, those guns, that we want to ensure that we get those off the street that are unwanted, unused and just hanging around," Brooks said.

For Rev. Dr. Wells, even one gun off the street makes a difference.

"The larger net you catch you cast, the greater your catch," he said. "When you catch something like an AK-47, right, or a military military grade weapon, and you get that off the street, that's a great day for the city of Chicago," he continued.