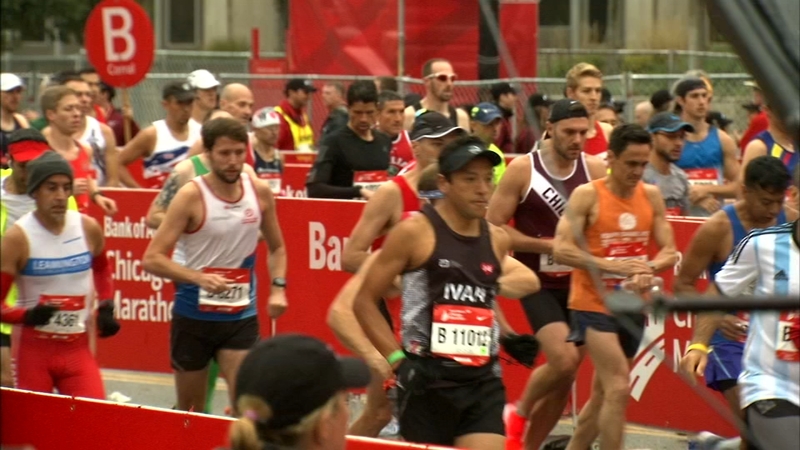 CHICAGO (WLS) -- More than 40,000 runners, including world-class elite runners, from more than 100 countries took to the streets of Chicago on Sunday for the 2018 Bank of America Chicago Marathon.

The rain held off for the 7:30 a.m. start, but race organizers raised the alert level to yellow, indicating some precautions need to be taken. Weather was a factor for runners throughout the day, with showers and high humidity during the race and slick spots along the route.

"Temperatures may fool them. The humidity is going to be something that may make it feel a little bit warmer than the temperatures," said Dr. George Chiampas, medical director of the Chicago Marathon, ahead of the race.

While the rain held off for the 7:30 a.m. start of the 2018 Bank of America Chicago Marathon, runners should be prepared for wet, humid conditions.

Several changes were made to the race course, which will weave through 29 neighborhoods on the city's North, West and South Sides. To view the full course map, click here.

The Chicago Marathon gets underway this Sunday and some streets have already been closed down for the annual event.

Farah finished in 2 hours, 5 minutes, 11 seconds. It was the first marathon on U.S. soil for Farah, who's won four Olympic gold medals and six world championships on the track.

Kenya's Brigid Kosgei won the women's race in 2:18:35, the third-fastest time in the history of the Chicago race. Kosgei finished second in Chicago last year.