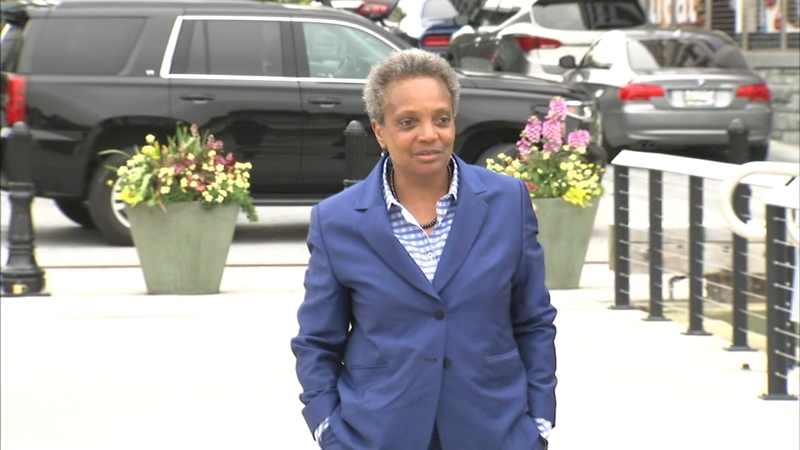 WASHINGTON D.C. (WLS) -- Wednesday was another busy day for mayor-elect Lori Lightfoot as she continues to make rounds in Washington, D.C., forging new relationships and working to bring more federal dollars to Chicago.

Lightfoot has repeatedly made it clear her values are different than those of President Donald Trump, on a variety of issues. But she is also keenly aware that having a good working relationship with the White House is important for Chicago.

One day after meeting with first daughter Ivanka Trump, the mayor-elect returned to the White House with a different focus, but a similar theme: take advantage of the clean slate she has with the Trump administration and build new relationships.

"As part of our discussion [Tuesday], Ivanka recommended that we meet with other members of her team. We went back to the White House this morning to do that and continued conversations around opportunity zones, re-entry issues, which they are very focused on, and some criminal justice reform issues as well," Lightfoot said.

A senior administration official at the White House said Lightfoot met with Brooke Rollins, Assistant to the President for Strategic Initiatives, and Ja'Ron Smith, Deputy Director of the Office of American Innovation, Wednesday morning.

"They discussed the critical need to curb violence in distressed communities and the Mayor-elect shared her vision for addressing the problem holistically. They agreed that the White House Opportunity Zone Council and Opportunity Zones can help create an environment for new opportunities and alternatives to crime. They look forward to collaborating on these issues when the Mayor-elect assumes office at the end of the month and plan to meet with her team in Chicago in the near future," the official said.

Lightfoot then headed to the Department of Transportation to meet with the undersecretary. With a capital bill now being worked on in Congress and some major transportation needs in Chicago, this is one of the more concrete stops for the mayor-elect that could result in helping the city tap into available federal dollars.

"We need to make sure we are focusing federal authorities on the fact that we have great needs in the city of Chicago, rebuilding our infrastructure - particularly we need additional funding for mass transit - so we'll be talking to them about those issues in detail," Lightfoot said.

Lightfoot also met with the Black Congressional Caucus at the U.S. Capitol Wednesday afternoon. She said since the election, she has not spoken to U.S. Rep. Danny Davis (D-IL 7th District) or U.S. Rep. Bobby Rush (D-IL 1st District), who did not support her in the mayor's race.

"If any young black male or female is killed by a Chicago police officer under a Lightfoot administration then the blood will be on those voters who elected her the mayor or Chicago," Rush said in March 2019.

Although Congressman Rush has not spoken to Lightfoot since the election, he's now calling his campaign controversy old news.

"If she wants me to apologize to her then I'm gonna consider that, but I don't think that that would be something that she would ask me to do," Rush said.

"My reaction is we need to move forward and make sure we're bringing people together in an important way," Lightfoot said on the topic.

After that, Lightfoot headed to meet with the mayor of Washington, D.C.

This trip has given her an opportunity to present herself on a national stage and be an ambassador for the city of Chicago, which Lightfoot has said is one of the many hats she will wear as mayor.