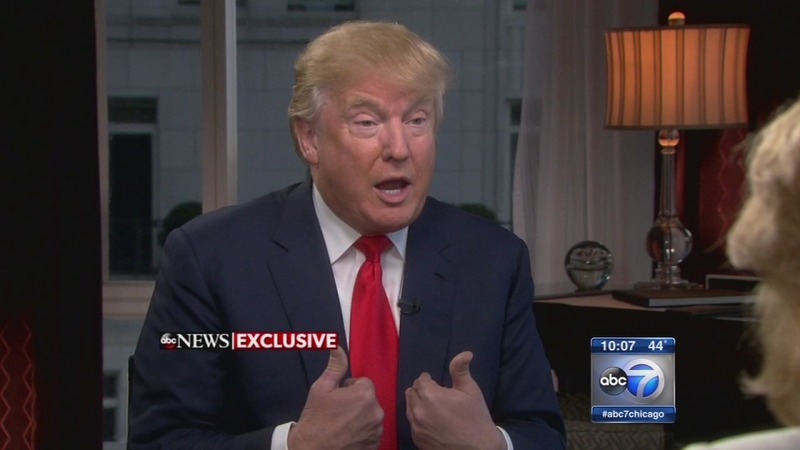 CHICAGO (WLS) -- In ABC News' exclusive one-on-one interview with Donald Trump, the presidential candidate shrugged off widespread criticism of his plan to ban Muslims in America.

The world has taken notice and the backlash is fierce, but Trump is not backing down. He told Barbara Walters something drastic has to be done, or America will see another attack.

Walters asks: "Do you regret your ban on Muslims, which some people think is un-American?"

"Not at all, we have to do the right thing, someone in this country has to say what's right, I have great respect, I have people that I have tremendous relationships with, they're Muslim. And Barbara, they agree with me 100 percent," Trump said.

Trump calls the ban temporary. He says it's the only way to stop terrorist attacks.

"There are people with tremendously bad intentions. We have to be tough, we have to be smart, we have to be vigilant," Trump said. "We don't know what's happening, we have a president who doesn't have a clue."

There's been a firestorm of criticism against Trump, from House Speaker Paul Ryan to Republicans running against him.

Others even comparing him to Hitler. The front page of the Philadelphia Daily News reads "The New Furor".

Walters asks: "Are you a bigot?"

And there's new speculation about Trump's loyalty to Republicans. He tweeted that 68 percent of his supporters would still vote for him if he ran as a third-party candidate.

In Chicago, some Muslims are worried about their families and their future in America. And it's not just Muslims who are condemning Trump, including some terrorism experts who say he is helping the enemy.

"This is really dangerous," said Robert Pape, a terrorism expert at University of Chicago. That's the opinion of the entire panel talking about Trump's proposal to ban Muslims from entering the country. Pape says it's exactly what ISIS wants.

"ISIS couldn't ask for better rhetoric than what Trump has handed them," Pape said.

They are here to talk about the Syrian refugee crisis. Some 300,000 Syrian refugees have been killed, and others forced to leave the country and live in horrible conditions.

Many believe the United States should be welcoming more of them, rather than turning them away. Lina Sergie Attar serves on the Syrian American Council in Chicago.

"Is this the America that when I lived in Syria, I yearned to come back to live in, because I just wanted to have that freedom to be who I wanted to be? And losing that would be losing the essence of who we are," Sergie Attar said.

Politicians on both sides of the aisle are lining up against the Republican front-running presidential candidate.

Many experts believe Trump's comments could alienate Muslims in this country and lead to more security issues.

"What he is doing and what he is saying is damaging American national security," said Gregory Maniatis, Migration Policy Institute.

Despite the backlash, Trump continues to draw large crowds to his events. He has no appearances scheduled in Chicago in the immediate future.