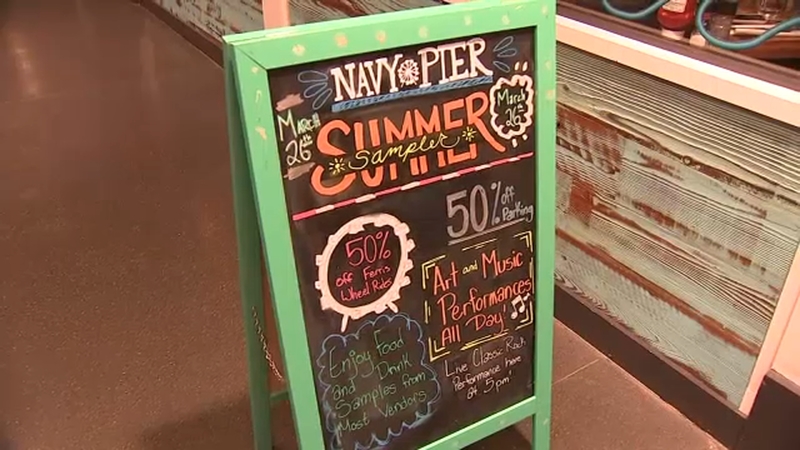 CHICAGO (WLS) -- Chicago got a taste of what's to come in the next few months as Navy Pier held its "Summer Sampler" event.

Summer made a brief appearance at the Chicago attraction and people like, April Morris and her 4-year-old daughter, couldn't be happier.

"It's nice that things are opening up and people are able to do things," Morris said. "It's been a long two years."

Despite overcast and gray skies, and even a few flurries, plenty of folks got a chance to enjoy a little bit of what's coming to the pier as it held its first-ever Summer Sampler event.

"Our restaurants and retail partners have discounts and deals all day long," said Erika Taylor, VP of arts, culture and engagement at Navy Pier. "Parking is half off. The Centennial Wheel is half off today... so it's a great day to come down and hang out at Navy Pier."

The day-long event, which began Saturday morning, showcased some of the best of what the pier has to offer.

Not only were there live performances every half hour, but retailers and restaurants, like Robert Gomez's Beat Kitchen Cantina - which opened in May - had both discounts and deals.

"We're doing a free empanada with the purchase of a margarita. It's working out well," Gomez said.

There were also half-price riverboat cruises on the Seadog, along with dance groups, DJs and more.

Some nine million people visit the Navy Pier every year, making it one of the city's most popular tourist attractions.

"Usually when I come here, there's not that many people. One or two here or there, but there's a lot of people here, kinda cold outside," said Cashshay Riddle.

While the day ended as it began, with a celebration of what's to come, it would not have been complete without the most well-known symbol of summer: fireworks.

Organizers said the taste of what's to come didn't disappoint, as most were reminded that warmer weather and summer fun is on the way.