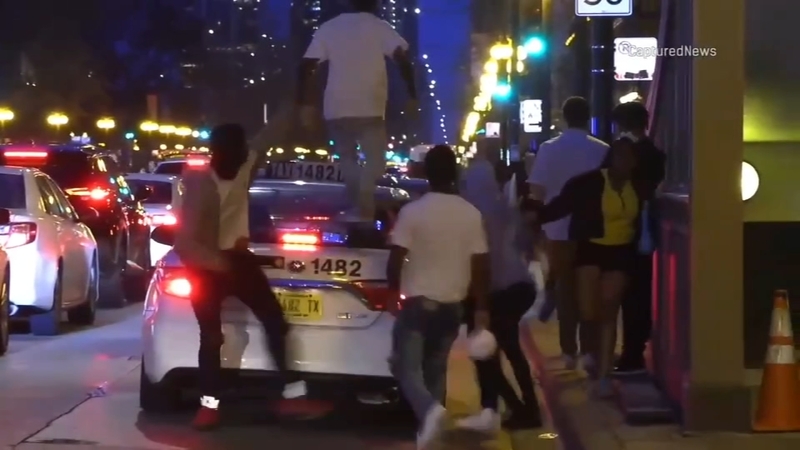 CPD says it was prepared for large crowds, despite weekend chaos

CHICAGO (WLS) -- Despite criticism to the contrary, a spokesperson for the Chicago Police Department said CPD was prepared for the downtown crowds Saturday.

Saturday night, hundreds of mostly teenagers took over Millennium Park. Police made 21 arrests among those who were seen engaging in unruly behavior, jumping on cars, causing fights.

"We had at least 400 by some estimates during the peak of mayhem. We just didn't have enough officers to contain the violence," said 2nd Ward Alderman Brian Hopkins. "Some arrests were made, but many, many more could have been made if we had the manpower to respond appropriately and we just didn't."

The havoc was not limited to downtown. In Lakeview East's popular entertainment district, teenagers were seen jumping on vehicles at Halsted and Roscoe. One broke a windshield then jumped off. Longtime residents were not amused, drawing the line between having fun and engaging in destructive behavior.

"This is a street with a lot of bars so you can expect a little rowdiness on a Saturday night, that's true, but not that kind of rowdiness," said Ilana Green. "I do get scared, so I try to go home early and pretend none of this exists."

"it was no shock that it happened," Ald. Hopkins said. "It was just a lack of resources to implement the plan that we've had for many months. Again, it sets a bad tone for the summer."

CPD responded to the criticism Monday, saying, "The Chicago Police Department anticipated the large gathering and had sufficient resources deployed to manage the crowd and ensure public safety."

They added that year-round preparations are undertaken to ensure adequate staffing and resources, and while everyone is welcome to enjoy the downtown area, those engaging in disorderly conduct or criminal activity will be arrested and held accountable.