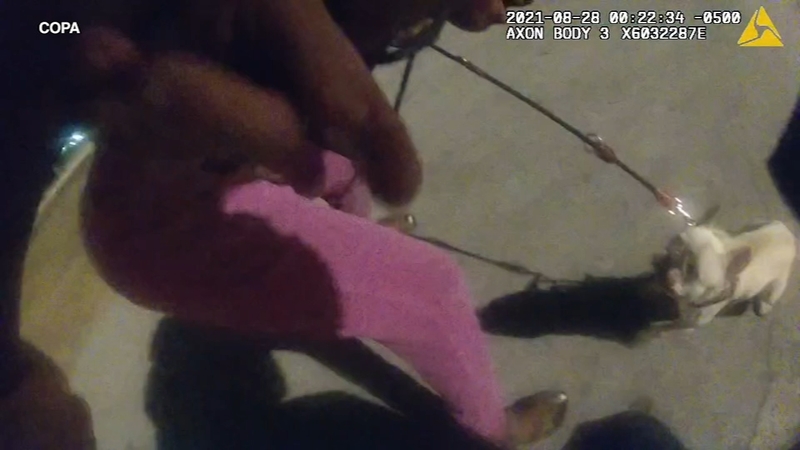 CHICAGO (WLS) -- The agency that oversees the Chicago Police Department has concluded its investigation into a confrontation between a police officer and a Black woman who claims she was racially profiled while walking her dog on the Lakefront in August.

The Civilian Office of Police Accountability, which investigates officer's use of force, said Thursday it sent its findings and recommendations to Supt. David Brown, though it didn't say what those findings were.

If COPA believes the officer should be disciplined, Brown would have 30 days to decide whether to bring administrative charges forward.

The confrontation unfolded shortly after midnight Aug. 28 at North Avenue Beach and was captured on Nikkita Brown's cellphone camera as well as the officer's body camera.

Brown was walking her dog at North Avenue Beach, which was closed at the time of the incident. A pod camera captured the initial interaction, as Brown twice turned to walk away before the cop got out of his vehicle.

Officer: (beep turns on body came) Now understand this.
Brown: Please don't, please respect my space. It's COVID. Six feet.
Officer: Respect your space? I'm about to put handcuffs on you.
Brown: You do not have a mask on!
Officer: I don't need a mask! I'm outside!
Officer: You need to exit.
Brown: Please back up. Back up, man! Back up!
Officer: Get out of the park! What do you not understand about that? The park is closed!

Brown: Stop spitting on me!
Officer: I'm not spitting on you!
Brown: You are spitting. Back up!
Speaking exclusively to ABC News, Brown said she feared for her life.

The video shows the officer physically struggling with Brown as he tries to force her off the beach.

The officer did not arrest Brown. Before the confrontation pod video shows the officer in his vehicle appearing to confront at least two other groups of people who then leave the beach without incident.

After the confrontation, which lasts roughly two minutes, the officer releases Brown and she asks him for his badge number as she walks away.

Brown's lawyers have called the altercation with the white officer "an obvious case of racial profiling."

The officer was placed on desk duty while COPA conducted its investigation.

Eyewitness News is not naming the officer that was involved in the case because that officer has not been charged with any crime.

According to the Invisible Institute, a nonprofit that tracks data on police conduct, the officer involved had 24 complaints filed against him from 2000-2018. Three resulted in discipline.