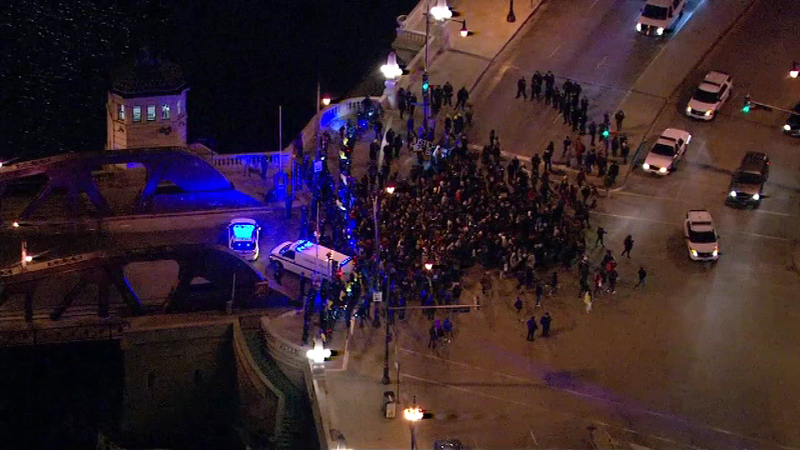 CHICAGO (WLS) -- Hundreds of protesters started marching towards Chicago's Loop Monday night as soon as they heard that a grand jury had decided not to indict a Ferguson, Missouri, police officer in the shooting death of an unarmed black 18-year-old.

Shouting profanities but largely peaceful, the group of protesters stopped traffic and blocked streets in Chicago's Loop as they marched north from Chicago Police headquarters at 35th and Michigan. Police briefly closed Lake Shore Drive and other streets around the Loop as they accompanied the moving protest through Chicago's downtown.

Chicago Police Supt. Garry McCarthy said that protesters marching through downtown Chicago were leaderless and not following police routing directions, but so far, had not caused problems.

Around 11 p.m., Chicago police wearing helmets and face shields prevented protesters from moving north across the Chicago River at Wabash.

Protest leaders encouraged the group assembled at Michigan Avenue to go home and reconvene at 7 a.m. Tuesday morning at State and Jackson.

No arrests have been made, and there were no reports of property damage, police said.

Earlier Monday night, there were tears and anger as the announcement in Ferguson elicited intense emotions from protesters gathered in Chicago's South Loop.

"It's a shame. They shot an unarmed child. They had no right to do that," said one protester.

At least 200 protesters gathered at 35th and Michigan as they waited in the cold for word from Ferguson.

ABC7's Eric Horng asked: "Chicago Police did not shoot Michael Brown, so why this gathering?"

The rally became a march as protesters took their message to the streets and vowed more demonstrations.

"What we're seeing is, across the country, a strategy of policing that is fundamentally racist, that criminalizes poverty, that criminalizes black and brown bodies," said Ashley Bohrer, a protester.
Earlier, another demonstration in the Loop, protestors stood with their hands up in a moment of silence for Michael Brown.

College student Kristin Brown is from Ferguson and says she took part in protests last summer in her home town.

"I'm afraid, and I'm distrustful of the same system that's meant to protect us. I don't want to call the police," Brown said.

"Tonight is a sad commentary of a historical pattern. An unarmed black teen shot and killed and it is seen as justifiable homicide," Rev. Jackson said.

The protest was one of several around the country that took place after St. Louis County Prosecuting Attorney Bob McCulloch's announcement that Officer Darren Wilson would not face charges in the Aug. 9 shooting of Michael Brown.