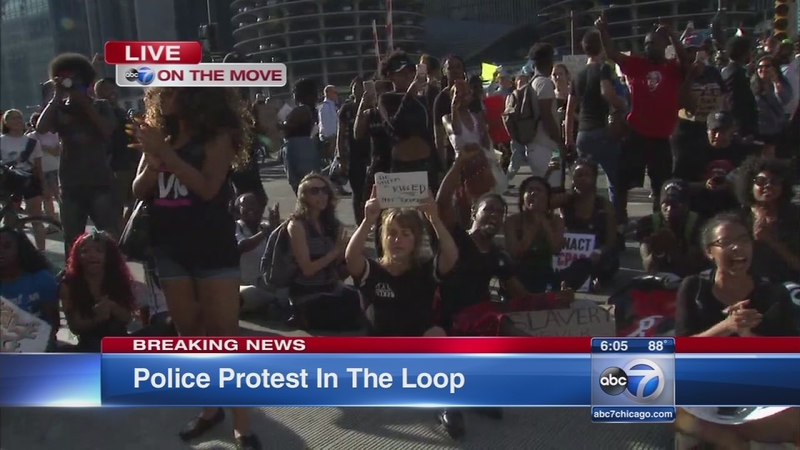 CHICAGO (WLS) -- Hundreds of protesters converged in downtown Chicago Monday afternoon to protest recent police shootings for the third day in a row. At times the crowd swelled to thousands.

Monday's event was organized by teenage girls who say they're committed to keeping it peaceful. The crowd swelled to at least 1,000 people at points during the protest.

Several hundred protesters gathered at Millennium Park near Michigan and Washington around 2 p.m., mostly teenage girls with tape over their mouths as part of a symbolic protest. They then marched to the Dirksen Federal Building and met up with several hundred more Black Lives Matter Chicago protesters on the plaza.

"Our job as activists is to shine a lot of light on the issues so that advocates can gain strength from the attention that they bring to them, and they can take that energy and they can go into offices and political spaces and they can talk to politicians and stuff like that," says Eva Lewis, Black Lives Matter Chicago.

The protesters walked around the Loop for several hours. At about 6 p.m., protesters stopped and sat on State Street from Wacker to Lake Street. They returned to Millennium Park around 7 p.m.

"We want to make sure that we let people know it's not business as usual, that as long as we keep getting killed then we have to keep taking the streets," says Kofi Ademola.

Their chants reverberated loudly, rousing bystanders on the sidewalks into the streets to join their mission against police brutality.

"I'm out here because one day I want to have a family, and when I have children I want to know they're going to come home safe," said Melody Angel.

Throughout the protest, Chicago police officers led the way by bike, clearing lanes through the Loop for the Black Lives Matter movement.

"If they know how we feel and they know that we want to make a difference, they can be involved in the process for making change," says Nataly Braye of Black Lives Matter Chi Youth.