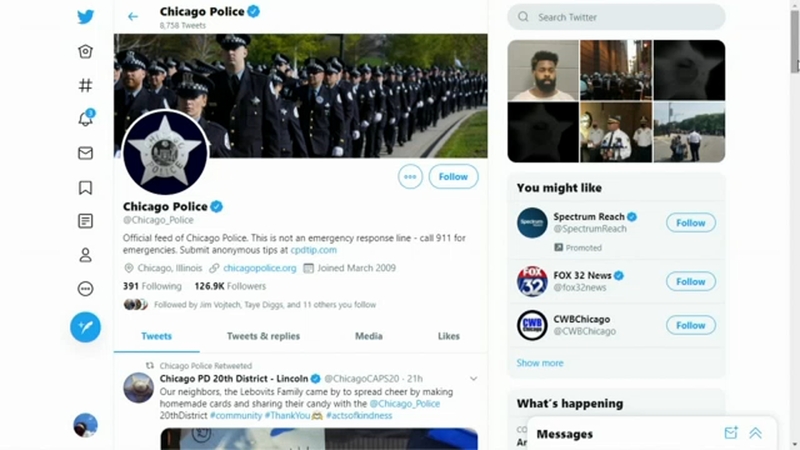 CHICAGO (WLS) -- A youth-led peaceful protest turned violent this past weekend as several clashes broke out between protesters and police. Within hours of the downtown demonstration, Chicago police used its main Twitter account to post mugshots and home blocks of people who faced criminal charges.

Dozens were arrested and several were hurt, including 17 police officers as protesters clashed with police Saturday in the Loop.

"Why is it necessary to put on social media because all it has created so far is harassment to these individuals and nothing else in the community other than more distrust and more division," said Ald. Byron Sigcho-Lopez, 25th Ward.

The Chicago Police Department is defending its actions at a downtown protest Saturday, but protesters continue to demand an apology for what they say was excessive force and escala

State law does require law enforcement to release identifying information of arrestees, but Ald. Sigcho-Lopez and others say proactively posting it on social media was out of line.

"It shows even at the highest level of the police department they are implementing bad judgement," said Berto Aguayo, founder of the anit-violence group Increase the Peace.

Facing a backlash, CPD deleted all the tweets except one. The department has since said it will no longer include residential addresses of offenders in social media posts to protect their privacy.
Besides changing policy on tweets, Berto Aguayo says police must review their tactics last weekend. Aguayo, who participated in the protest, says he was peppered sprayed and hit with a baton.

Several protesters were arrested and at least one was hurt after a clash with Chicago police in the Loop Saturday.

"It was almost like an abusive parent showing who is boss in the house. [It was] completely horrific because it was a bunch of kids organizing their right to peacefully assemble," Aguayo said.

Moving forward, Aguayo and Ald. Sigcho- Lopez says there must be a city-wide plan to make sure police and protesters can co-exist peacefully.

Chicago Police Superintendent David Brown addresses the violent clash between police and protesters over the weekend.

Johnson is due in bond court Monday. He's charged with felony aggravated battery to a peace officer.

Jeremey Johnson, 25, has been charged with felony aggravated battery to a peace officer after repeatedly striking a #ChicagoPolice officer in the head with a skateboard at yesterday’s downtown protest. https://t.co/OChnGsGmBd pic.twitter.com/CF4Y6gtCpO