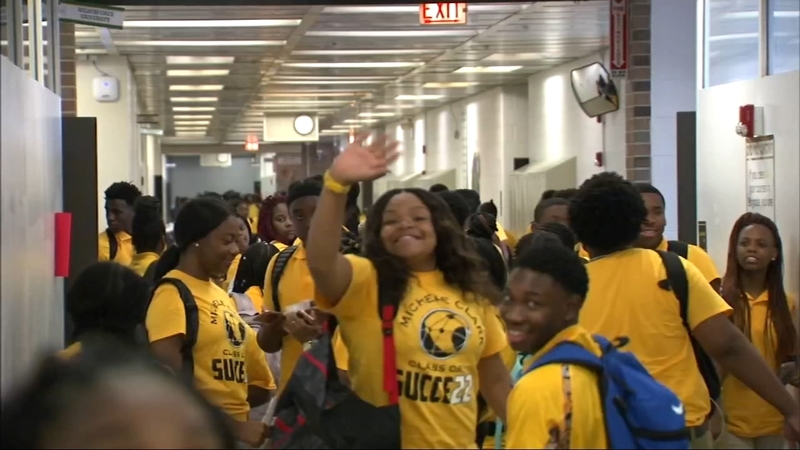 It was a hot day but most students at Michele Clark Magnet High School welcomed the beginning of the school year, especially the gold-clad freshmen.

"At first I was kind of nervous but now I am here I like it here and I got a lot of support here," said freshman Diamond Davis.

Her classmate Jerrod Grafton said he was shocked to be here, "because, like, I ain't (sic) know nobody except my sister and then once I came I met people who were cool."

The quiet West Side school has an enrollment of 500, which is growing. Administrators scrubbed the walls and painted the halls to be ready for the first day of classes. Principal Charles Anderson also dressed in gold to emphasize his connection to student achievement, a key message on this day.

Melissa Hughes teaches Spoken Word poetry with a focus on sensitivity to trauma. First day for her is critically important in establishing rapport.

"We have a high expectation what we hope for you and from you and that does not mean it has to be a strict punitive environment," she said, "but that we are on your case because we're on your side."

Only one teacher was not able to be present due to non-compliance with CPS's late summer background checks. In the wake of Mayor Rahm Emanuel's announcement that he would not seek a third term, the Chicago Teachers Union highlighted the stress that may have been involved.

"You know, if a 30 year employee is told that you can't come to work on Tuesday, you need to be there for their students," said Jesse Sharkey, CTU Acting President. "That is incredibly disruptive, as you can imagine."

But inside Michele Clark Magnet High School the focus was on getting the first day right so it could lead to success all year long.

"The more students feel a part, the more they want to be a part. So we want to start the first day with a bang, making sure students know we are here for you, come back, you are part of this family," Anderson said.

Hundreds of thousands of Chicago Public School students head back to class Tuesday.

A special dance performance greeted parents and students at the school. Eighth grader Nancy Quezada is happy to be back.

"I don't know, you're just exited. It's your last year and you gotta make the best out of it," she said.

Perez Elementary is one of several schools in Mayor Emanuel's ambitious plan to establish universal free pre-k for all 4-year-olds by 2021. In the first year, expanded programming will accommodate an additional 3,700 students.

Meanwhile, 266 Chicago Public School employees will not be in class for the start of school Tuesday. They were removed because of a new background check requirement.

CPS CEO Janice Jackson says 245 of those employees refused to submit to a background check. Dozens of them were teachers.

"It's kind of disappointing because they should have done background checks before not this year so now it gets me thinking what's going on," said parent Guadalupe Ceja.