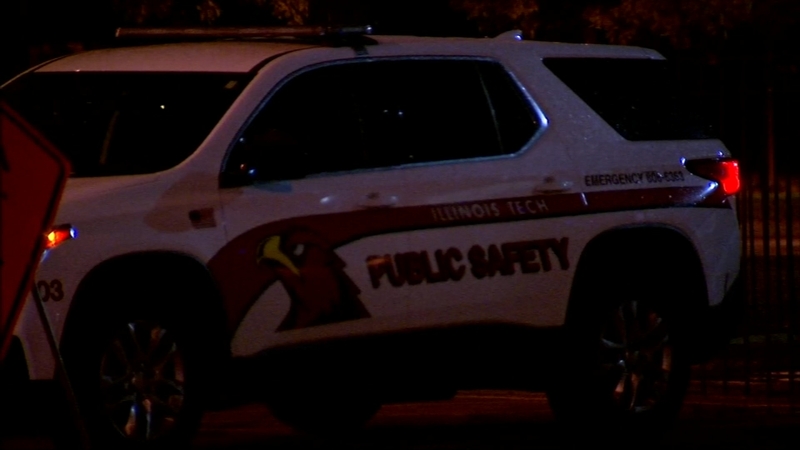 CHICAGO (WLS) -- A person was shot with a paintball gun Wednesday afternoon after days of similar attacks on the Illinois Institute of Technology campus in Bronzeville on the South Side.

A silver sedan was northbound in the 3100 block of South State Street about 5 p.m. when someone inside fired paintballs, striking one person, according to an alert from the IIT Department of Public Safety.

A male was hit in the neck but left the scene before officers could arrive, Chicago police said.

"What's the point of shooting students that are kind of just going about their daily business trying to get their education?" wondered Robert Mathis, IIT student.

The car, possibly a Chevrolet Impala or an older-model Acura, then left the campus, school officials said. Anyone with information about the vehicle is asked to call the Department of Public Safety at 312-808-6363.

Tuesday two men were shot with a pellet gun on IIT campus.

The first victim, who police said was an 18-21 year old man, was wounded in the groin area.

Afraid for his safety, the first victim spoke to ABC7 Eyewitness News by phone Wednesday night. He said he was walking on State Street toward the CTA Green Line when he saw something sticking out of a car window.

"It looked like a gun so my first instinct was to hit the ground," said the victim, who asked to remain anonymous. "So I ended up trying to drop down to the ground as faster as I could."

He said the offender fired multiple shots and he was hit once.

"If I didn't hit the ground who knows what could have happened," he said.

He was not seriously injured.

The second victim was a 77-year-old man who police said heard a popping sound in the back of his head and then realized he was bleeding.

An IIT security guard told investigators that people in a silver sedan have been driving around the area "for the past couple days" shooting paintball and pellet guns, police said.

Students said they were happy to see more officer stationed around campus Wednesday.

"It is more like a deterrent," Mathis said. "I am sure they wouldn't just shoot someone when a public safety officer is standing right there."