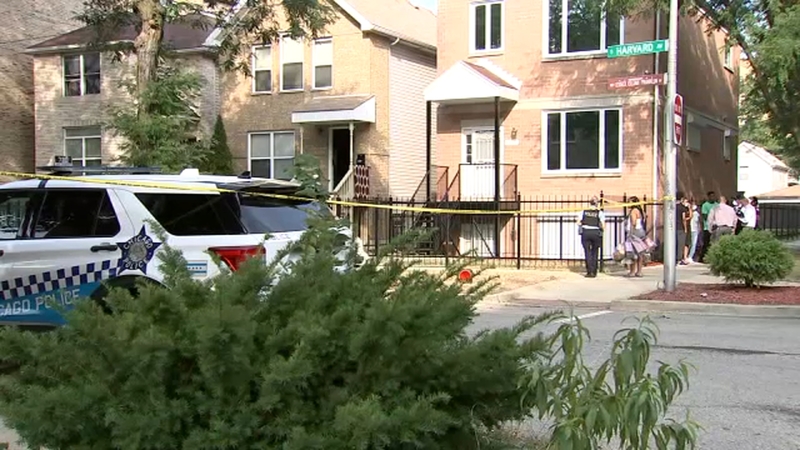 CHICAGO (WLS) -- A man who was fatally shot by Chicago police Sunday morning in the city's Englewood neighborhood has been identified as 28-year-old Turell Brown, according to the medical examiner.

ABC7 spoke to Brown's mother and sister Monday morning, who said they are heartbroken.

"I can not get an understanding of why my son is dead," said Brown's mom, Angela Wade-Brown.

They said that they were told he was armed with a knife, but beyond that, they have no more details and want to know why deadly force had to be used.

"His girlfriend called around 11 a.m. and said, 'You need to get out here because the police shot Turell,'" Angela recalled.

Crime tape blocked off the 6500-Block of South Harvard Avenue on the South Side Sunday for hours.

An officer shot Brown, who was later died from his wounds, according to officials.

"they have a gun on one side and on the opposite side, they have a taser. If he had a knife, why didn't tey use the taser," asked Brown's sister, Kaleah.

Beyond that, police have not said if he lunged at them or anyone else, as they have not given any more details about the confrontation that lead to the shooting.

Chicago police held a press conference Monday about the incident, but did not release an exact timeline, citing that officers still need to be interviewed.

"We know that the officer discharged their weapon and we know that the offender is deceased. But, all the things in the sequence between - that is for COPA to investigate," CPD Superintendent David Brown said during the press conference.

Brown's family said he and his girlfriend, who lived together, were on and off again for 10 years and had a history of arguing.

Some neighbors, who did not want to go on camera, said months ago one of the arguments led to a SWAT situation.

Meanwhile, Brown's mother said she often told her son that they should not be together.

"If you can't get along, then do not be there," Angela said she told her son. "Because now this is what it came to."

The Civilian Office of Police Accountability, the independent agency charged with probing police shootings, confirmed in a tweet Sunday afternoon that its investigators had also responded to the shooting.

COPA is responding to an officer-involved shooting in the 6500 block of South Harvard. If you or anyone you know has information pertaining to this incident, please contact our office at 312-746-3609 or visit our website at https://t.co/LqABRQUFLE

When asked if the officers' body camera footage would be released, the city oversight agency said it understands "the importance of transparency and timelines, and will release at the earliest point possible without comprising the integrity of the investigation."