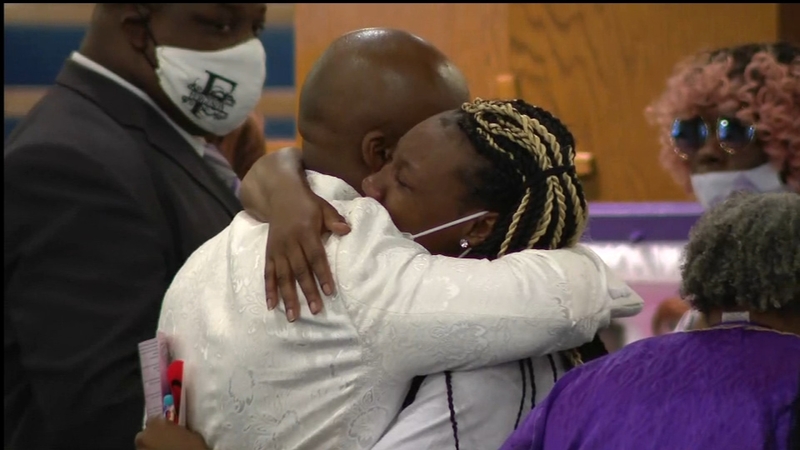 CHICAGO (WLS) -- A funeral for the 7-year-old Natalia Wallace was held Friday.

Mourners gathered to remember Natalia during a service at The New Evangelical Bible Church at 636 West Washington Blvd.

She was killed after being struck by a stray bullet at a family 4th of July party in the 100-block of North Latrobe Avenue.

Natalia was playing on a sidewalk when police said three armed men got out of a white car and fired more than 20 times in the direction of the people holding the party that police said included many children.

She was buried at Oak Ridge Cemetery, according to family.

One person has been charged with first degree murder in the South Austin neighborhood over the weekend, Chicago police said.

Chicago police say Merrill drove the white car that took shooters to the party where Natalia was killed.

"To see my daughter on the table with a gunshot wound to the forehead that will changed somebody's life," said her father Nathan Wallace.

The Wallace family said Natalie loved drawing and coloring, saying something in Chicago has to give.
Police said using video from the neighborhood they followed the white vehicle through the district, identified a license plate, and were eventually able to stop the car.

Merrill was charged with Wallace's murder. Police are still seeking to identify and arrest three more suspects in the shooting. No further details about those suspects have been released.

Police said they believe a possible motive was gang retaliation. The investigation is ongoing.

Community activists say the bigger problem of violence in the city won't be solved by police, but from within the community.

"We have to put social workers on the street. We have to reopen up the mental health facilities. We have to put money and invest in programs for young people," said Ja'Mal Green, community activist.