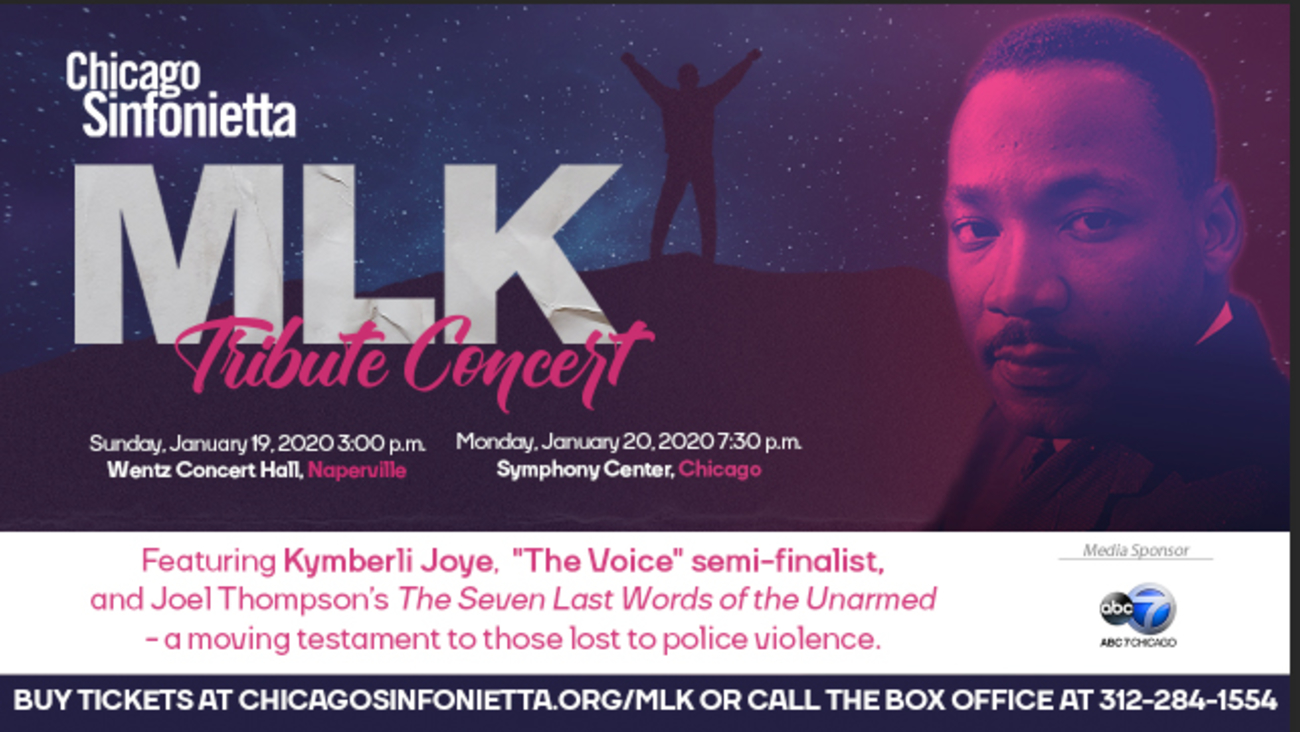 Highlights will include Rush and Joye's professional collaborative debut during Patty Griffin's Up to the Mountain and the Chicago premiere of Joel Thompson's The Seven Last Words of the Unarmed, allowing listeners to experience a sweeping, musical journey meant to drive poignant conversation and change in society.

Under the direction of Guest Conductor Jonathan Rush, Chicago Sinfonietta's MLK Tribute Concert will open with Patty Griffin's Up to the Mountain, a piece inspired by Dr. Martin Luther King Jr.'s final words of his last public speech, "I've Been to the Mountaintop."

Solo vocals from Kymberli Joye will soar during this piece as she shares the stage with Rush, her younger brother. "Up to the Mountain" begins this concert journey on a hopeful, aspirational note, setting the tone for the works to come. Both Rush and Joye bring a distinct, youthful voice to this work, and their family connection and music history will imbue the performance with additional meaning and context.

"As the guest conductor for this concert, it is thrilling to perform and collaborate with my sister for the first time in a professional capacity," said Rush. "I feel this brings a whole new level and layer to Griffin's work. The message 'Up to the Mountain' displays on the stage is a clear representation of what Dr. Martin Luther King Jr. would want for society. As Dr. Martin Luther King Jr. described in his speech, sometimes people look over the mountain and they are afraid they might fall, but there are ways to move forward and progress. This performance is the most humane call for brotherhood and sisterhood."

Participating in her first solo performance with an orchestra and first-ever concert with Chicago Sinfonietta, Kymberli Joye adds, "'Up to the Mountain' gives Chicago Sinfonietta listeners the opportunity to come together and hope for better in our community. It provides a solemn work of art that can be seen as a joyful reflection. Dr. Martin Luther King Jr. might not have been able to see the promised land, but we are lucky enough to have the freedom to continue to work toward actionable change."

The first half of the concert continues with the traditional spiritual "Deep River" conducted by Chicago Sinfonietta Music Director Mei-Ann Chen.

"Deep River" is followed by the Chicago premiere of Joel Thompson's moving testament to those lost to police violence, "The Seven Last Words of the Unarmed." Directly after, audience members will experience the beautiful Academy Award-winning piece by John Legend and Common from the film Selma, "Glory," which will conclude with a solo by vocalist, Kymberli Joye. Both works will be performed with the orchestra by the Adrian Dunn Singers.

"After being troubled by the onslaught of killings of unarmed black men, 'The Seven Last Words of the Unarmed' was a personal way to process my emotions and I did not originally write the piece intending for it to be heard," said composer Joel Thompson. "However, the death of Freddie Gray pushed me to bring this piece to life. Since its world premiere in 2015, I am proud that it has been a source of much conversation and inspiration for listeners. Having it programmed within a Dr. Martin Luther King Jr. tribute concert further emphasizes to audience members and the world that we still need to make changes within our society. It is tragically unfortunate that this piece is so relevant and that we have so much to understand and implement to reach Dr. Martin Luther King Jr.'s vision, but we can still work toward a more equal and kind world."

As the final, devastating notes of "The Seven Last Words of the Unarmed" are performed, the orchestra and choir will transition seamlessly into "Glory," thereby completing the emotional journey from hope to sadness and back again.

The second half of Chicago Sinfonietta's MLK Tribute Concert will feature the final movement of one of Gustav Mahler's most popular and successful works during his lifetime, "Symphony No. 2 (Resurrection Symphony)." Featuring the voices of the North Central College Concert Choir and Roosevelt University Conservatory Chorus, with soloists Leah Dexter (mezzo-soprano) and Summer Hassan (soprano), the collective group will tell a beautiful story of life to end the concert with feelings of hope.

"The Chicago Sinfonietta has grand plans for this season's MLK Tribute concert with five potent works, three singers, three choirs and one symphony premiere," said Mei-Ann Chen, music director of Chicago Sinfonietta. "In this annual remembrance of a champion of civil rights and the important social issues of today, we present an unforgettable program covering an enormous range of emotions conveyed through the widest spectrum of sonic experiences. We are especially thrilled to present the Chicago premiere Joel Thompson's powerful Seven Last Words of the Unarmed and in another Sinfonietta first, welcome three choruses (The Adrian Dunn Singers, North Central College Concert Choir, and the Roosevelt University Conservatory Chorus) to join the orchestra onstage as we close the concert raising our voices for a better tomorrow!"

Tickets to Chicago Sinfonietta's MLK Tribute Concert range from $10 to $62 when purchased in advance online. For tickets or more information, please visit www.chicagosinfonietta.org.

About the Sinfonietta
Now in its 32nd year, Chicago Sinfonietta has pushed artistic boundaries to provide an alternative way of hearing, seeing and thinking about a symphony orchestra and is dedicated to promoting diversity, inclusion, racial and cultural equity in the arts. Each concert experience blends inventive new works with classical masterworks, each from a diverse array of voices, to entertain, transform and inspire. In 2016, Chicago Sinfonietta was the proud recipient of John D. and Catherine T. MacArthur Foundation's prestigious MacArthur Award for Creative and Effective Institutions (MACEI). This award recognizes exceptional organizations that are key contributors in their fields.

The orchestra was founded by Maestro Paul Freeman to address the disconnect between the utter lack of diversity in orchestras and the vibrant, nuanced, communities for which they play. For more than 32 years, Chicago Sinfonietta has made it their mission to represent the city of Chicago, reflecting that vibrancy on stage and in their programming, making classical music accessible for anyone. In everything they do, Chicago Sinfonietta is inspired by founder Paul Freeman (1936-2015). The orchestra's 32 years have been highlighted by six European tours, two Kennedy Center performances, three Millennium Park concerts attended by over 21,000 people and 16 recordings, including Project W, which was released in March 2019.
Report a correction or typo
Related topics:
arts & entertainmentchicagonapervilleconcertmlk
Copyright © 2022 WLS-TV. All Rights Reserved.
TOP STORIES
2nd man killed in Near North Side McDonald's mass shooting ID'd
White Sox star says Yankees slugger made racist remark, benches clear
Police investigating potential abduction on Far South Side
Residents mourn loss of resort as firefighters continue battling blaze
Wisconsin couple kills bear that attacked them in their home
Man shot, killed 'without provocation' on NYC subway: police
Beloved Old St. Pat's pastor, Fr. Hurley, returns to say farewell
Show More
Noah Thompson crowned as the next 'American Idol' in season finale
ABC7 presents 'Our Chicago: Asian Voices'
A new billionaire has been minted nearly every day during the pandemic
Texas woman sought in fatal shooting of pro cyclist: US Marshals
Man caught on camera pushing 26-weeks-pregnant woman to ground
More TOP STORIES News