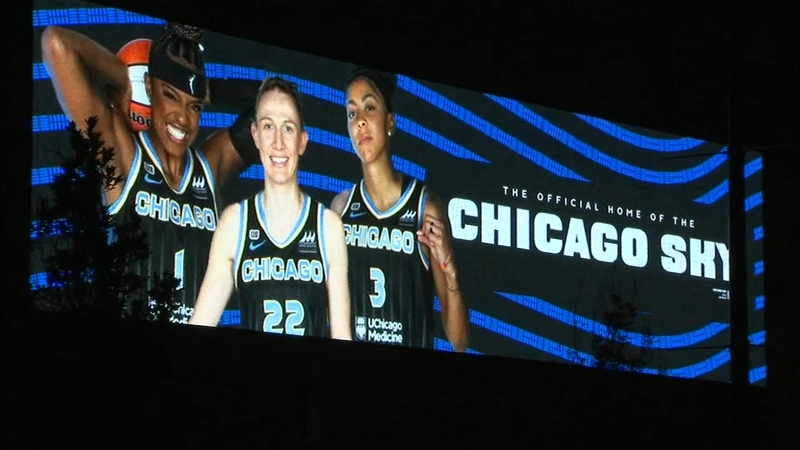 CHICAGO (WLS) -- The Chicago Sky beat the Phoenix Mercury 86-50 in front of a sold-out crowd at Wintrust Arena Friday night, taking a 2-1 series lead in the WNBA Finals.

It was the largest margin of victory ever in a WNBA Finals game. The Sky's win in Game 3 means Chicago's team can clinch the title on Sunday before a hometown crowd.

The Sky's run to the finals has captured the hearts of Chicago sports fans and inspired kids across the city. Thomas Hoyne Elementary School even hosted a pep rally for the Sky as part of "All About The Girls Day."

"My daughter can grow up to understand that, you know, this world is not limited to just men, you know, she can be dominant in this world as well," he said.

The Art Institute of Chicago lions and City Hall were all decked out in Sky gear Friday. Chance the Rapper - who was spotted in the crowd Friday night - even pledged to get a tattoo to commemorate a win if the Sky were victorious.

Wintrust Arena is sold out ahead for Game 3 of the WNBA Finals with the Chicago Sky and Phoenix Mercury tied up at one game apiece.

"With Diana Taurasi on that other bench - and whether she's on the floor or on the bench, that woman will come in and make you pay if you let her," Constabile said. "So the Sky really need to steal this one. They need to take the momentum back."

The Sky's second ever WNBA Finals appearance caps off a wild year. Naperville's own Candace Parker, a two-time league MVP, joined the Sky this season. But then the team ended the regular season with an even 16 - 16 record, still managing to fight their way to the finals.

"It just really has been a remarkable trip to this finals moment, and I think, I hope, the city is finally taking notice of what a special team this is," Constabile said.

Kinsley Murphy, 16, said she drove about 10 hours from Missouri. The varsity shooting guard was excited to watch Parker at work.

This weekend is sure to be a bright moment for Sky fans and the growing popularity of women's professional sports.

"It's a great idea to support women in the sport of basketball and to have been more popular, and have more fans and come out and support them and hopefully be as popular as men's basketball one day," fan Maren San Gabriel said.