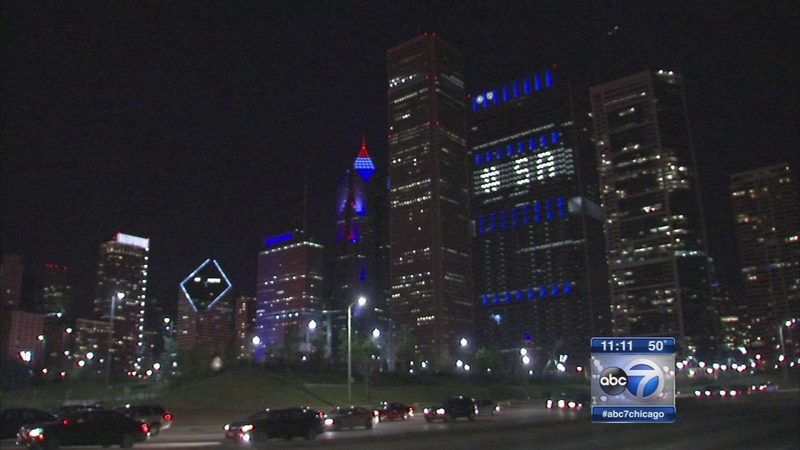 CHICAGO (WLS) -- Condolences are pouring into Paris from around the world after the series of terrorist attacks rocked France's capital Friday. In Chicago, a group called "Chicago Stands With Paris" organized a Saturday evening vigil for the victims.

There were dozens of Chicagoans in Paris when the shootings took place, some of them seventh and eighth graders on a school trip who returned home Saturday evening and have quite the stories to tell.

Even though France has partially closed its borders, they are still allowing flights in and out of the country, and Saturday four flights from Paris' Charles de Gaulle Airport landed at Chicago's O'Hare International Airport, including one carrying a group of Chicago Public School students who got more than they bargained for during a two-week trip to Paris.

This was not the homecoming anyone imagined. The parents of two dozen seventh graders who two weeks ago sent their kids off on a field trip to Paris Saturday breathed a collective sigh of relief as the children landed back in Chicago safe and sound one day after the terrorist attacks that left over 120 people dead and 350 wounded.

"It was a few hours we were very scared, without knowing, especially myself I was flying at the time with no Wi-Fi on the airplane," said parent Acyr Borges.

The children from Lincoln Park's Lincoln Elementary were each staying with host parents spread across the city of Paris. When the attacks happened no one knew where the other was.

"First thing I did was text all my friends, call my family, tell them I was ok," said Graham Christensen, Lincoln Elementary School.

"The teachers did a great job," parent Broc Christensen said. "They were in constant contact with us so we felt like they were safe."

In all, four flights from Paris landed in Chicago Saturday. While most of the arriving passengers were nowhere near the terrorist attacks, we found one, who was in the area near the concert hall massacre just minutes it happened. Yet, even as sirens blared through the streets and the subway was shut down, uncertainty reigned.

"A lot of people were on the phone were and somebody spoke in English about a hostage situation, and a terrorist attack, but there was more confusion and it was only when I managed to get back to my hotel when I realized what was happening," said teacher Kanishka Chaubhuri.

Because of the situation in Paris, airlines are waiving their change fees for passengers looking to change their travel plans to and from Paris.

Chicago stands with Paris after attacks

Chicago is standing in solidarity with Paris in ways large and small. The skyline is lit up in patriotic colors and there are many people who lit candles during a vigil on Michigan Avenue.

Several hundred Chicagoans showed their support for France and to mourn the victims of the terrorist attacks.

"A horrible thing happened in Paris and we need to stand in solidarity with the French to say that none of us will tolerate this," said Eileen Soderstrom.

"We are here with my wife and our child to stand by the French people. We are all French tonight," said George Acane.

They light candles on a ledge outside the Michigan Avenue building that houses the French consulate. They carry signs of support and leave flowers. There are no speeches, just quiet reflection and prayer, and a shared sense of community.

"It's hard to know what an individual can do, so that's why I showed up here, just to be with other people," Joan Pomeranc said.

On the city's North Side a concert benefitting Syrian refugees was planned months in advance, but the attacks with their possible connections to ISIS make Saturday night's music all the more poignant.

"It's an enormously painful time and it's hard to know what to do, quite frankly. But this concert really feels like a gift for our respective communities," said Rabbi Brant Rosen.

Signs of support for France are everywhere in Chicago, perhaps the most visible is the patriotic lights on the city's skyline.

"It's a sad, but it's a proud and beautiful thing to see all of here gathered here tonight in support of France and the liberties that we both value as nations," said Pola Henderson.

The Council of Islamic Organizations of Greater Chicago issued a statement Saturday night saying that they are "horrified at the heinous attacks on civilians in Paris that have resulted in the loss of more than 100 precious lives, many more injuries, and shock in the peaceful lives. We share in their grief and offer sincere prayers of peace and healing for the affected families and all people of France."

Local law enforcement officials say there is no indication of any credible threat against Navy Pier or other attractions in Chicago, but some venues are taking no chances and adding extra security just to be on the safe side.

There was a mix of concern and defiance as some Wildcats fans headed to Saturday's football game against Purdue, despite the terror attacks in Paris.

"It just happened (Friday), so it could happen, but I don't think it will," said Josh Lipman.

Although school officials declined to give specifics about their security, Northwestern's Ryan Field, as well as other venues around the Chicago area, are stepping up their efforts.

Already enhanced security at the Evanston stadium meant bags checks along with other measures.

"They looked inside every bag. We didn't have any trouble," said Gail Reed.

Some are worried the kind of attack like the ones in Paris Friday could happen in the Chicago.

"We've got landmark building down there and I am concerned for that," David Madison said.

It is expected that places where crowds and tourists gather could see an enhanced security presence. Local law enforcement officials say there is not credible threat or nexus to Chicago.

"I think it's critical that we remain vigilant to the possibility," said Earnest Brown, Cook County Homeland Security.

Although FBI field offices have boosted surveillance of suspects in the United States in an attempt to prevent a similar attack, some terrorism experts say there are no guarantees others would be inspired to act.

"Even as we're more prepared, we're not going to be able to be prepared enough to have perfect security," said Robert Pape, University of Chicago terrorism expert.