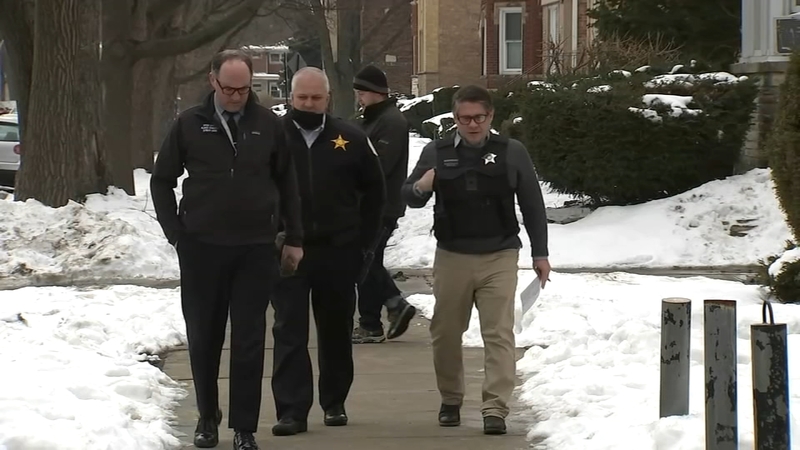 CHICAGO (WLS) -- Police were once again in West Rogers Park Tuesday morning investigating what may be another act of hate against the neighborhood's Jewish community. This, as Chicago police announce hate crime charges filed against a man in a case involving vandalism of several synagogues and schools on the Far North Side Sunday.

At a press conference Tuesday afternoon, Chicago Police Superintendent David Brown announced that hate crime charges, as well as criminal damage to property, have been filed against Shahid Hussain, 39, of Niles.

"The 911 caller stated there was a subject yelling anti-Semitic slurs and threats. Officers located him and detained him," Brown said. "These acts of hate gripped the West Rogers Park community and shocked the city of Chicago."

While police would not speculate on Hussain's motivations, prosecuting a hate crime -- which often involves acts of vandalism -- is not an easy thing to prove.

"It takes it from what could have been a misdemeanor case to a felony,' said Cook County State's Attorney Kim Foxx. "We're days out of Holocaust Remembrance, the fact of the matter that a swastika was used gives us a firm footing."

Investigators said at around 4:40 p.m. Sunday, someone spray-painted graffiti on the F.R.E.E. Synagogue in the 2900-block of West Devon Avenue.

Police remained on scene for some time after members of the synagogue discovered yellow swastikas painted on the outside wall.

"So we were inside packing meals as we do every week, hundreds of meals for families in need, for Holocaust survivors and Russian seniors, and, as we come outside finishing that, we see a swastika on our building," said Rabbi Levi Notik of Synagogue F.R.E.E., which stands for "Friends of Refugees from Eastern Europe."

As they tried to make sense of the hateful vandalism, a congregant walked in shaken, saying he had been assaulted by a man as he was heading into Jewish services.

"He came in after the fact. He was very shaken. Apparently, somebody jumped him and yelled racial slurs," Rabbi Notik said. "Law enforcement has been amazing. We thank God his injuries are very minor. And thank God no one was seriously hurt."

Police said the same person then walked a block and spray-painted hate symbols on a cargo container at a Jewish high school. Police were at the scene of another Jewish school in the same area later.

Superintendent Brown said Tuesday police are investigating another incident in which a member of a North Side congregation was threatened Tuesday morning.

A synagogue congregant's car windows were shattered by three men who allegedly verbally threatened him as he was was arriving at B'nei Ruven just before 7 a.m.

"This is our home and place. There is no room for hate. No room for anti-Semitism," said Rabbi Baruch Hertz with Congregation B'nei Ruven.

Alderman Debra Silverstein of the 50th Ward has been reaching out to local businesses to make sure they're on alert.

"Hate has no place in our neighborhood, and we will not tolerate it," Silverstein said. "The community is very upset, very concerned. We're looking to the police."

Mayor Lori Lightfoot met with a group of Rogers Park rabbis and other Jewish leaders Monday night, addressing their concerns about the incidents.

"Doing nothing is not an option. Based upon, what we have known so far, this individual has caused a lot of harm," Lightfoot said.

On Saturday, Kol Tuv Kosher Foods had a window smashed, and right next door the front door of Tel-Aviv Kosher Bakery was shattered. Owner Walter Richtman was furious.

"The person, whoever did it, has to understand we are all the same people; we are all God's people," he said. "We need to be treated equally."

All of the incidents happened around or near the 2900-block of West Devon Avenue, a neighborhood full of Jewish establishments, and they took place just days after Holocaust Remembrance Day.

Longtime resident Levi Bergovoy is a congregant at the synagogue that was defaced this past Sunday. He said the Jewish house of worship, which was rebuilt after being burnt down in 1993, regularly practices evacuation drills with its members.

"After Coleyville, I started to understand most people in this country don't realize the Jewish experience that almost all synagogues across the country have varying levels of heightened security, armed security just to be able to pray on Saturday mornings. It's insane," he said.

"This is the American Jewish experience these days," said David Goldenberg of the Anti-Defamation League. "I can't imagine a time when I'm going to walk into a synagogue again and not pass an armed security guard for services."

According to the ADL, anti-Semitic incidents increased by 84% in the Midwest between 2016 and 2020.

"The way that will overcome this hate, the way that we will get through this darkness is through goodness," Rabbi Notik said. "Through positivity and kindness -- light is the answer."

Concerns about the series of incidents runs high, especially in the wake of the recent hostage situation in Texas.

The rabbi with F.R.E.E. synagogue said there are cameras all over the building, but they didn't catch the crimes taking place.

The Chicago chapter of the Council on America-Islamic Relations (CAIR-Chicago), the nation's largest Muslim civil rights and advocacy organization, condemned the recent anti-Semitic and racist graffiti.

"Chicago's Muslim community stands in full solidarity with our Jewish brothers and sisters as they deal with the trauma of this vile act of hate," CAIR-Chicago Executive Director Ahmed Rehab said. "No American should have to feel vulnerable and at risk simply due to their religious affiliation. Unfortunately, we know the feeling all too well as we've dealt with a disturbing number of mosque vandalism incidents. We recognize the source of hate as one, and regardless of religious affiliation, we stand together in solidarity against it as one. An attack on any is an attack on us all. It is imperative that hate crime statutes be fully observed to send a strong message that such acts will carry grave consequences and to deter repeat. I've reached out to the rabbi at F.R.E.E. to express our condemnation and support and requested to attend Shabbat service as an expression of solidarity."

Meanwhile, Alderman Silverstein said police are looking for any video evidence from businesses in the area.

I am deeply upset to learn that a local synagogue, a school, and businesses were vandalized over the weekend-some with symbols of hate and anti-Semitism. These crimes are undoubtedly a part of the troubling rise in anti-Semitism that we've seen both in our city and across the country. Make no mistake: this attack, as well as the deep hatred and bigotry that drives other anti-Semitic acts like it, is an attack on our city's Jewish community and social fabric. Those responsible must be held accountable. An arrest has been made and the police are working diligently to gather evidence to support charges. As Chicagoans and as Americans, it is our responsibility to call hate speech and acts out and protect our Jewish brothers and sisters who endure this hatred year after year. Without our determined and collective action, anti-Semitism will continue to thrive. That's why we must renew our commitment to building a community built with love and purpose and excise the bigots that cause and benefit from hate.