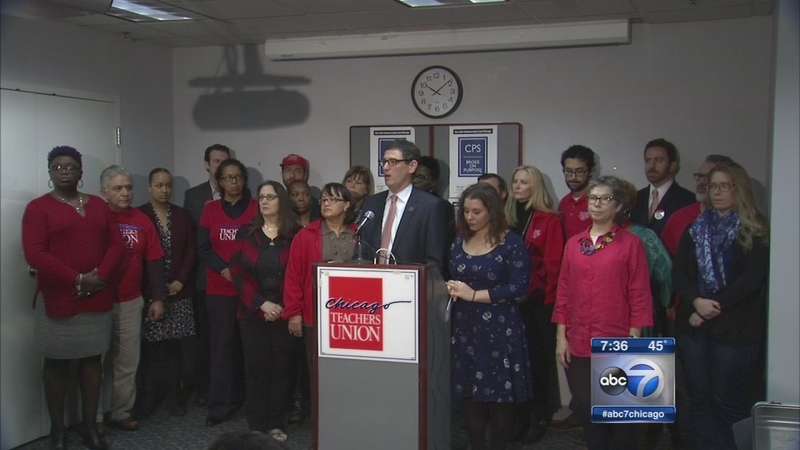 But a strike cannot take place until 105 days after the fact-finding phase begins. The CTU has called for that phase to begin immediately, but CPS does not want to start fact finding until mid-February. The union has filed an unfair labor practice charge with the Illinois Educational Relations Board, which is scheduled dto meet at the end of January. If it agrees with the union to begin fact finding at that time, the earliest strike date would be in May 2016.

"Rahm Emanuel really does not need a teacher's strike. He really doesn't, and what we're telling him if he doesn't listen to us, that is what he'll get," said CTU Vice President Jesse Sharkey.

The union wants the mayor and the school board to listen to their ideas on how to bail out the cash-strapped school district before asking the teachers to sacrifice.

"Do not cut our schools, do not lay off our staff and solve the budget problems on the backs of educators," Sharkey said.

The CTU is calling for new revenue that would come from TIF (Tax Increment Financing) funds, restructuring bank loans and asking the city's financial sector to pay more, though the union stopped short of calling for a property tax increase which would require a change in state law.

The Civic Federation's Lawrence Msall says the CTU's ideas for revenue are unrealistic and would not come close to meeting pension obligations and closing the massive budget hole.

"There has to be a joint sacrifice by everyone," Msall said. "We can't continue to pretend that it doesn't cost a lot to have a defined benefit pension plan that provides a 3 percent compounded automatic interest every year."

Chicago Public School's CEO Forrest Claypool release a written statement which reads in part, "Rather than strike, we ask that the Chicago Teachers Union join us to fight for our shared goal of equal education funding from Springfield for Chicago's children."

Some teachers agree, including a CPS teacher who asked to remain anonymous and says she was pressured by her union representative to vote yes on the strike. She refused, and also claims many of her coworkers are disappointed in their union leadership.

The union says the strike authorization gives them a leg up in the negotiation process. They say in the wake of the Laquan McDonald case, Mayor Emanuel cannot politically afford to have a strike.