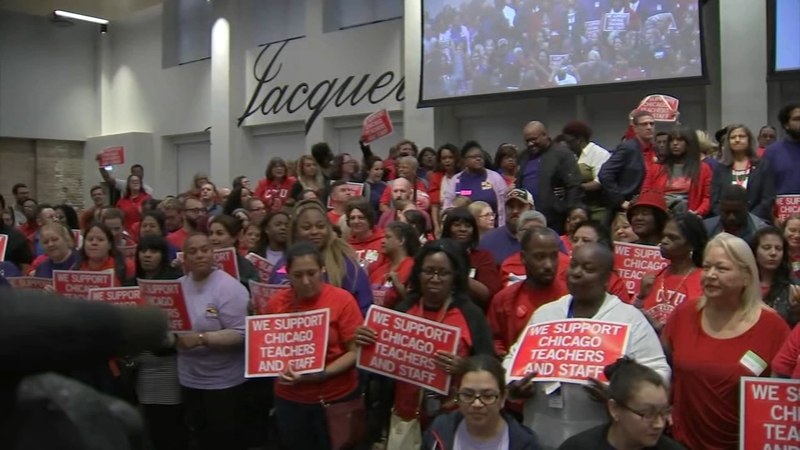 CHICAGO (WLS) -- The Chicago Teachers Union's House of Delegates on Wednesday formally set their strike date as October 17 at 12:01 a.m.

Last week, the union filed a formal notice of intent to strike after members overwhelmingly voted to authorize the strike. That started the clock ticking on a 10-day cooling off period.

The earliest day the strike could have begun was October 7, but the union opted to set its date 10 days later.

"I want no one in the city of Chicago to doubt our resolve. We mean to improve the conditions in our schools," said CTU president Jesse Sharkey.

Both CTU and Chicago Public Schools said they remain committed to contract negotiations. The strike date give the parties two weeks to reach a deal.

"No one wants a strike, but it seems like the board is pushing us for a strike, so we can get the staffing that we need for schools," said Susan Buchanan, CTU House of Delegates member.

"I'm not naive about the complexities here, but I remain hopeful that if they come to the table in good faith, if they respond to our written offers that are out there, we'll get a deal done," said Mayor Lori Lightfoot.

The city has offered 16 percent raises over five years for CPS teachers. The Chicago Teachers Union, however, is still pressuring the city for more nurses, counselors and librarians. Wages and healthcare costs are the primary issues.

While the CTU and CPS continue to negotiate, the sticking point appears to center on class sizes and the union's desire for more nurses, social workers and librarians. CPS said they're committed to adding more of those positions, but the union wants it in writing in their contract.

Chicago Park District workers were set to strike as well, but the city announced Wednesday it had reached a contract agreement with 24 of the 25 unions.

"We are pleased that we've reached agreements with 24 of our 25 unions," said Chicago Park District General Superintendent and CEO Michael Kelly. "I would like to personally thank union leadership for their efforts to reach a resolution that is mutually favorable for its members, the District and city taxpayers."

The averted Park District strike means in the case of a teacher's union strike, Park District facilities and organizations will be available for parents who need childcare help for children that would otherwise be in school while they work.

Negotiations with SEIU Local 73 are ongoing and the union served Park District officials with a notice to strike on or after October 8 if a contract agreement is not reached. Park District officials said park hours, program availability and waste removal would all be affected by an SEIU Local 73 strike. The union also represents some CPS staff members.

"We have been their personal ATM machine. We have not had a raise in three years," said Kim Akins, SEIU Local 73 member.

"What I would encourage is that CTU and SEIU 73 come back to us with written counter-proposals and that we can get a deal done," said Mayor Lightfoot.