Chicago celebrates Thanksgiving with free meals distributed across the city 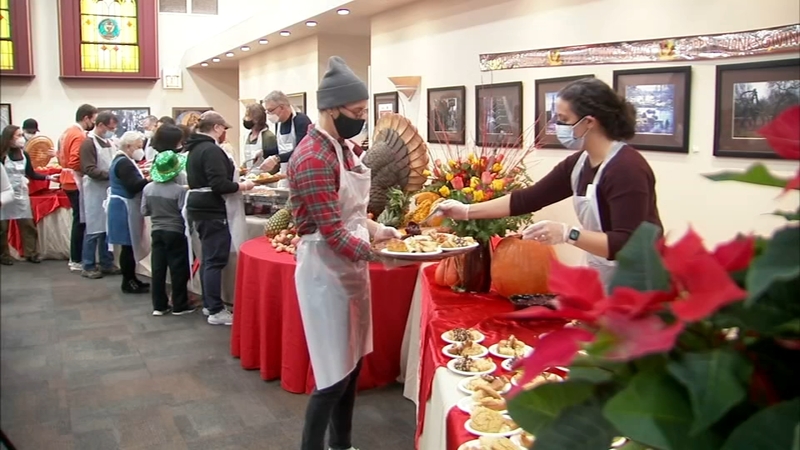 Chicago celebrates Thanksgiving with free meals for those in need

CHICAGO (WLS) -- Chicago is celebrating the literal meaning of the Thanksgiving holiday by expressing thanks and by giving.

While the holiday is a time to give thanks for our loved ones and for our blessings, it can also be a difficult time of year for many who may not have a home or a family to go to.

It is for them that all over Chicago, community groups, churches and just everyday folks came together to help out and serve a hot meal to those who might otherwise not have one.

Among them were Catholic charities, where Cardinal Blase Cupich was on hand to lend an ear, as well as provide comfort and support.

"The pandemic has separated all of us, so this is an opportunity to remember that one of the great gifts we have in life is connecting with other people, and that's what we want to do," he said.

"No matter where I'm at in the world, I'm coming back home. That man is the one who put me on the path," said one meal recipient.

But while many came together in gratitude, some of the most vulnerable are still isolating.

That's why Little Brothers, Friends of the Elderly recruited over 200 volunteers to pick up meals and personally deliver them to seniors all over the city, bringing some extra love with them. Hand designed bags, flowers and cider are a part of every meal.

"During the pandemic, it's been gripping for them. It's so important to retain these traditions and let them know they're remembered and they're appreciated," said Simone Mitchell-Peterson with Little Brothers, Friends of the Elderly.

The full course was a traditional Thanksgiving meal, including a generous serving of turkey with all the fixings, and were provided by Gibson's restaurant.

Proving that giving back doesn't have to take dozens of people or a large banquet hall, a handful of friends, including local rapper DonnieDeeMoney, set up a small loaned space where they hope people will come in from the cold later today in Garfield Park and share a meal, as well as pick up some new clothes.

"We got clothes, food -- they can come in, sit, chill, relax [and] listen to some good music," said Donnie Boyd, also known as DonnieDeeMoney.

"On the way back, I was seeing people pulling up, giving them plates and they're sitting there eating right on the curb. I'm like, 'Nah. You come in, sit down, relax, watch some T.V. -- a football game or whatever, and enjoy yourself,'" said Tayvon Liddell.

Elmora Mitchell-Scott said she has a lot to be grateful for as she celebrates Thanksgiving with La Rabida Children's Hospital, and their special feast for hospital patients and their families.

"I'm just trying to bring my family all together and have a blessing meal, and this helps me," she said.

For a second year, the South Side children's medical center served up its Thanksgiving feast tradition.

Like in years past, the Thanksgiving dinner was prepared by hospital staff with the help of Chef Tonie Houke of the American Culinary Federation, who's been behind the holiday offering for the last 11 years.

ABC7 Eyewitness News family partnered with the hospital and were there to help with the handoff.

She said it took three days to prepare the turkey dinner, which includes a turkey dinner with all the fixings and Eli's cheesecake for dessert.

They will distribute more than 250 meals, and members from ABC7 Eyewitness News family partnered with the hospital and were there to help with the handoff.

It is in that same spirit that a group of female restauranteurs, led by Vermillion's Rohini Dey, packed, loaded up and distributed hundreds of gourmet meals Thursday destined for working moms, the homeless...and heartbreakingly, to over 140 Afghan refugees. All of them, unaccompanied children.

"Refugees are very close to my heart. I'm an immigrant myself and have embraced this country as home," Dey said. "The Afghan refugees were foremost in my mind."

Chicagoan Courtney Penn also spent her Thanksgiving helping distribute holiday meals to some 400-area veterans and those in need.

"I know that I am very fortunate and there are people who are in need," she said. "I know it was my duty, if I can, to give back to those."

Organizers of the effort said the dinners will go to veterans and the homeless, as well as churches with food pantries and others who are food insecure.

The Reverend Jesse Jackson was on hand for the holiday giveaway, which was done with the help of the Links Incorporated Organization.

"We've found that all of the food pantries are overwhelmed with need," said Rev. Janette Wilson, Rainbow PUSH Coalition. "And we're also supporting the West Side Justice Center. They're having the same issue. They live alone, have no family members and can't even afford to buy food."

"It's so important to give thanks and to let others know others are thinking about them as well," added Audrena Spence, with the Links Incorporated Lake Shore Chapter.

Organizers of the effort said the dinners will go to veterans and the homeless, as well as churches with food pantries and others who are food insecure.

"We just want to say thank you by giving our time, giving our talents and giving our treasures," said Rev. Jeanette Wilson, with the Rainbow Push Coalition. "This is a very difficult time, so we are praying for families."

The full course was a traditional Thanksgiving meal, including a generous serving of turkey with all the fixings, and were provided by Gibson's restaurant.

Earlier Thursday morning, as representatives from veterans groups, the West Side Justice Center, Roses of Roseland, among others, picked up their allotted dinners. Those here could not help but realized what a blessing it is to be a blessing to others.