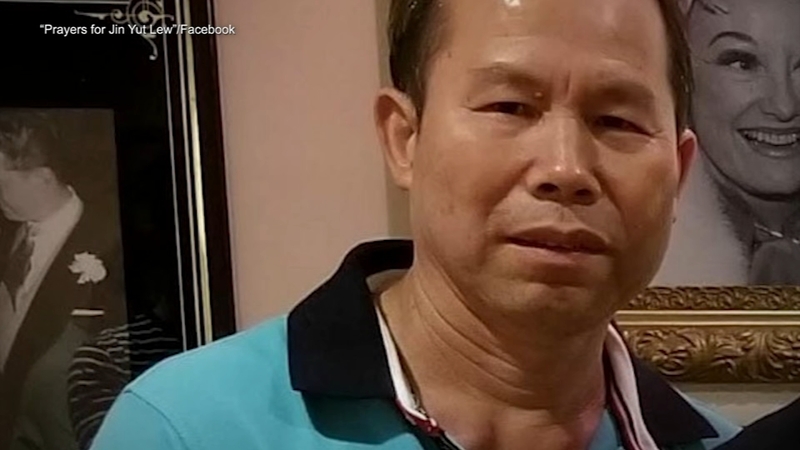 $5K reward being offered in search for Chinatown robbery suspect

CHICAGO (WLS) -- Community activists are offering a reward for information as a 61-year-old father remains in a coma after being beaten, robbed and left unconscious on a street in Chinatown earlier this month.

A small group gathered in Chinatown Sunday after a street cleaning crew found Jin Yut Lew unconscious on a sidewalk near the Dan Ryan Expressway, after being beaten and robbed, April 7.

Now, a $5,000 reward is being offered to catch those responsible for the attack.

"Someone's father, brother, grandfather: We have to do something here," activist Frank Coconate said. "We want to find the people that did this to Mr. Lew."

Lew was found near 25th Place and Princeton Avenue. He is in a hospital after being so badly beaten his face is nearly unrecognizable. He remained in a coma as of Sunday and may have permanent brain damage.
"He already had multiple brain surgeries. They had to do a craniotomy to decompress the brain because of brain bleeding," said Dr. Kim Yee, the spokesperson for the family.

The family said they were unable to track down their father after he was last seen leaving his son's South Loop building the night of April 6.

His two grown sons filed a missing person's report the morning of April 8 and posted their plea with his picture all over social media.

Something in the picture looked familiar.
"One of the viewers who works at the hospital ICU kind of recognized and connected to the family," Yee said.

Lew had been laying there, unidentified, for more than a day at that point.

Lew is well-respected in the Chinatown restaurant community, which is now petrified of increasingly violent crime.

"The community is scared. A lot of residents come to me, talk to me. They're afraid to just be doing this, standing out here," said Tom Lam, Chicago Alternative Policing Strategy facilitator for Chinatown.

No one was in custody as of Monday morning.