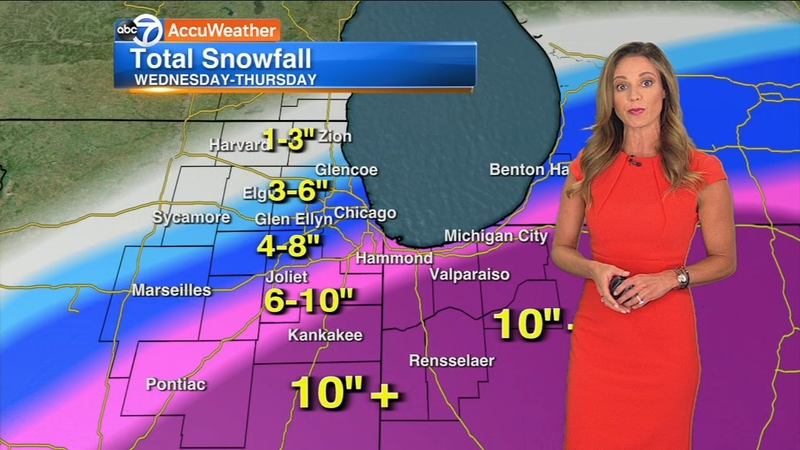 More than 10 inches of snow possible in winter storm

CHICAGO (WLS) -- A winter storm warning has prompted Governor JB Pritzker to issue a disaster declaration for the state ahead of the arrival of the snow.

Heavy snow and dangerous travel conditions are possible Tuesday evening through Thursday this week, as the latest winter storm takes aim at the Chicago area.

A Winter Storm Warning is in effect from 8 p.m. Tuesday through 6 p.m. Wednesday for DuPage, Kendall, central Cook, eastern Will, Grundy, LaSalle, northern Will and southern Cook counties in Illinois.

A Winter Storm Warning is in effect from 10 p.m. Tuesday through 6 p.m. Thursday for Ford, Iroquois, Kankakee and Livingston counties in Illinois and La Porte, Benton, Jasper, Lake, Newton and Porter counties in Indiana, until 6 p.m.

A Winter Weather Advisory is in effect until 6 p.m. Wednesday for DeKalb, Kane, Lee and northern Cook counties in Illinois.

Pritzker's proclamation activates approximately 130 members of the Illinois National Guard to ensure all state resources are available to deal with the blizzard conditions expected over the coming days, a release said.

"I'm authorizing a disaster proclamation for Winter Storm Landon, effective immediately, to support local government disaster response and recovery operations wherever necessary," said Governor JB Pritzker. "On the ground, all state assets stand ready to assist. I encourage everyone to do what you can to stay safe: listen to local authorities to stay up to date with the latest conditions in your community and make sure your household has essentials."

Governor JB Pritzker issued a disaster declaration ahead of the severe winter storm which activates about 130 Ilinois National Guard members.

ABC7 Chicago meteorologist Larry Mowry said there will be two waves of snow, which may only be distinguishable by the snow intensity. There's also likely to be a sharp cutoff between areas that get just a dusting of snow and areas that get significantly more.

In the southwest and south suburbs and northwest Indiana, snow is expected to begin in the evening and continue through until Thursday, though the intensity is likely to ebb and then increase again.

City dwellers can expect to wake up Wednesday morning with a couple inches of snow on the ground by 7:30 a.m., while areas to the south are more likely to wake up to five to six inches, Mowry said.
EMBED More News Videos

Most of the Chicago area and Northwest Indiana are under a winter storm warning, and snow plows and salt trucks will be out overnight to prep the roads.

The first wave of wintry precipitation began as rain Tuesday afternoon. It will turn to snow as cold air arrives, Mowry said. This appears to be the heaviest period of snowfall, with snow falling up to an inch an hour, and will continue through the early afternoon on Wednesday.

Snow totals by Wednesday afternoon could reach 10 inches in the far south suburbs, with 3 to 6 inches possible in the city and lighter amounts of only 1 to 3 inches for the northern suburbs.

Light snow will continue off and on through Wednesday evening, Mowry said. A break in the heaviest snow rates may occur during the day on Wednesday before the second wave arrives Wednesday night into Thursday.

The latest models show the second wave of snow is trending farther south, meaning there could be lighter snow totals than the first wave. While there is still the possibility for several inches for areas southeast of Chicago, lighter accumulations are expected in the city.

The heavy snow could lead to hazardous morning commutes in the Chicago area on both Wednesday and Thursday, though Mowry said the storm will really wreak havoc downstate into central Illinois and north central Indiana.

Mowry also noted that this snow will be a heavier, wet snow than the powdery lake-effect snow last week.

South suburbs like Orland Park have spent Tuesday preparing, loading up salt trucks and readying snow plows to first salt the roads and then clear the fast-falling snow out of the way.

A winter storm bearing down on the Chicago area could 6 to 10 inches of snow to some of the south suburbs, who are readying their plows and salt trucks tonight.

The amount of snow falling overnight plus temperatures plunging from the balmy mid-40s to the 20s mean that roads won't just be slushy, they're also likely to become slick and ice over.

Morning commuters are cautioned to budget extra time should they need to drive, and to be vigilant both for road slickness and for possible poor visibility as the heavy snow falls steadily. Anyone who can work from home is being encouraged to be officials.

In Palos Hills, the hardware stores are stocked up and ready.

Expect Chicago weather tomorrow to include snow, as a Winter Storm Warning and Advisory have been issued for parts of the area.

"I got a big snow blower, and it's actually kind of fun. I have to make sure the pup don't slip; I'm prepared," customer Kevin Gardner said.

Workers at Duke's Ace Hardware off 111th Street ensured their shelves were stocked, too.

"Got a lot of salt, we have blowers hopefully on the way today; we ordered some the other day. We're supposed to get a truck today, all depends what the truck does," said Ken Fry, with Duke's Ace Hardware.

The store was pretty quiet Tuesday morning, but workers are expecting that to change, with folks rushing in later in the day and Wednesday in preparation.

"Fluid, salt, we've got more salt in the back, we're ready for anybody coming in; we've got shovels, racks and roof rakes and ice pucks," Fry said.

Areas along the North Shore were particularly hard hit, with Wilmette, Skokie and Evanston getting pounded with over 9 inches of snow. In the city, Midway and Humboldt Park saw upwards of 7 inches.