WLS
By Will Jones, Eric Horng and Cate Cauguiran and Liz Nagy 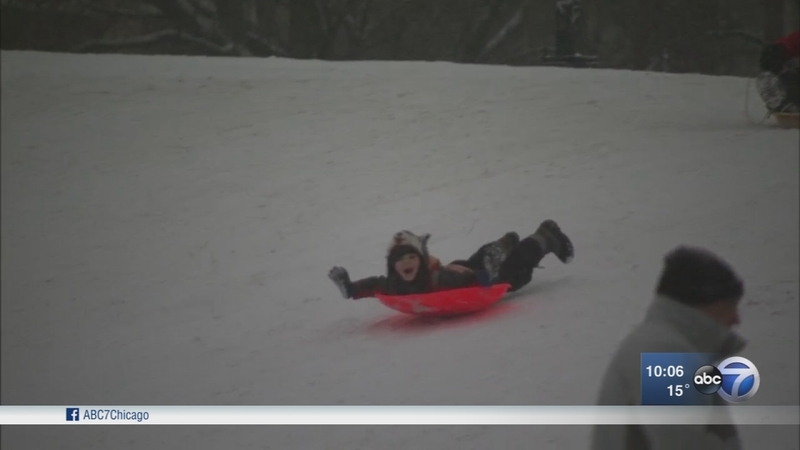 CHICAGO (WLS) -- Snow ranging from an inch up to five inches fell across the Chicago area, making roads slick during the evening commute.

Between 1 and 3 inches of snow was expected to accumulate, mainly after 2 p.m. Friday and continuing through midnight, according to the National Weather Service.

Conditions could be right for a slippery evening commute, the weather service said. Drivers should also expect reduced visibility at times.

"It's Chicago. We expect it. We get used to it. And you deal with it," said commuter Denise Centracchio.

The snow and cold made for slippery conditions on the area's highways, and caught some drivers off guard.

"It is bad out there," said driver Jeremy Zagrakalis. "Probably saw about three, four accidents out there. One fishtailed right in front of me. A little wild."

"We call it 'greasy,'" said driver Wes Mills. "It's when the snow gets real soft and sloppy."

"There's been multiple cars in the ditch, in the sides and in the ditch," said driver Julie Bernard. "We've seen lots of accidents on our way."

"IDOT is fully prepared with trucks and manpower," said IDOT spokesperson Dianna Urgo. "We're going to have a full group out throughout the district, which is about 300 trucks on Illinois roads."

But keeping the roads safe is also the responsibility of drivers.

"We need the public's help in keeping roads safe, so that means take it slow, make sure you're increasing your stopping distance between you and the car in front of you," Urgo said.

Urgo also reminded drivers to be patient around the snow plows and salt trucks.

"The biggest thing is don't crowd our plows. We always say that but what does it mean? It means giving our plows the right of way. Give them room to do their job," she said.

Emergency officials stressed drivers should be sure to have a stocked survival kit in their cars, because this is not the kind of weather to get stranded in without the right tools.

More than the snow, the low temperatures could get drivers into serious trouble on the roadways.

"People need to be prepared for all instances and all circumstances," said Natalia Derevyanny, Cook County Department of Homeland Security and Emergency Management.

The department advises travelers to keep a winter emergency kit handy while traveling because even a short drive can turn into a dangerous one.
"It truly could be a matter of life or death, it's very important for people to have the requisite items in their car," Derevyanny said.

A basic winter car kit should include:

It's also a good idea to keep vital items in the glove compartment so you don't have to get out of your car in the cold to retrieve them.

Building an emergency winter car kit is as simple as dropping by your local pharmacy or home improvement store.

A winter weather advisory was issued for north central and northeastern Illinois, and northwest Indiana. The highest amount of snow is expected to fall to the south.

It wasn't all crashes and danger. The city looked like a living snow globe Friday afternoon.

The Lincoln Park Zoo lights seemed to have a special glimmer through the falling flakes, even as the crowd struggled to stay warm.

Sea lions huddled over a life-sized ice cube. It may be the single coldest job in town, though it's a good night for a swim for the sea lion.

It was also a perfect day to hit the hills. Many flocked to Oz Park to take their new sleds for an inaugural run.

"We got these, um, saucer ones, they're faster than my sister's," said Henry Clark, sledder.

A nice way to end a cold week cooped up inside.

"She actually dragged me here. We got outside and she's like, 'We're going to the park.' We'll be here 'til she tires," said Sarah Raehl, whose dog insisted they go to Oz Park.

Following this round of snow, temperatures in Chicago will drop back down to the single digits. That means a boom for heating and heating repair businesses.

A high of 16 degrees was forecast for Friday, with windchill values as low as minus 2. A high of 6 was expected Saturday.

Temperatures were expected to fall below zero on New Year's Eve and New Year's Day.

"We do our yearly maintenance. With the weather turning we want to make sure that furnace is firing up reliably," said Joe Settipani, homeowner.

One Hour Heating & Air Conditioning in Elk Grove Village received hundreds of calls this week, mostly for no heat.

"Typically up until now we have been doing maintenance calls, just keeping people's systems maintained, but then when the cold weather hits we get that influx of no heat calls," said owner Bill Wykle.

A couple in Ravenswood Manor is dressing in layers in doors since they have no heat in their condo. When they returned home from vacation Wednesday they found a notice on their door from Peoples Gas, notifying them that their gas was shut off for a meter change and maintenance last week.

"When we arrived Wednesday it was like an igloo," said David Graham. "It's pretty frustrating, but we are trying to stay upbeat about it. I tell my wife it is just really cheap camping but at this point it's kind of past comical and we just want the heat back on."

Peoples Gas released a statement Friday, saying, "We apologize for the delay in restoring gas to the Graham household. We are looking into why the restoration took longer than usual and will address the cause. Our technicians were able to get the gas turned today."